Why I returned my Ebola medal to the Government

In 2015, the Government awarded Dr Claire Ferraro the Ebola medal to acknowledge her work during the Ebola crisis. On Tuesday, along with twenty other Ebola volunteers, she returned her medal in opposition to the current ‘hostile environment’ in the NHS and its charging regulations that are deterring undocumented migrants from accessing healthcare in the UK. Dr Ferraro is a teaching and research fellow at Queen Mary University of London’s Public Global Health Unit. 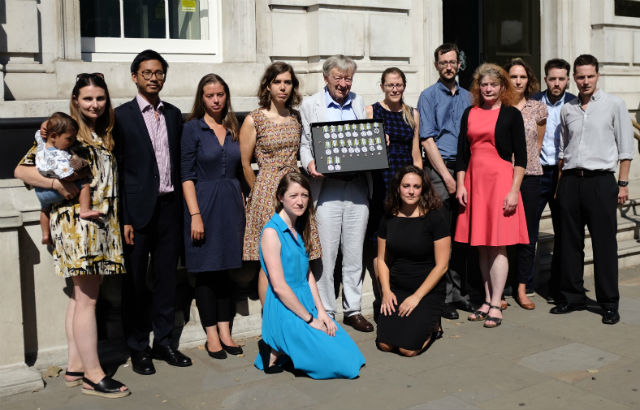 Working as an Ebola doctor during the crisis

I spent almost five months volunteering as an Ebola doctor in Freetown, Sierra Leone, during the Ebola crisis between December 2014 and April 2015. These were some of the toughest months of my working life; physically, mentally and, above all else, emotionally.

When David Cameron announced that we would be given medals, I felt surprised, a little embarrassed (since the people dealing with Ebola day in, day out deserved a medal more than me), but certainly very honoured – especially as this was the first time that any medals have been awarded for work in a humanitarian crisis.

Over the years, looking at my medal has reminded me of the sheer courage and determination of those I met in Sierra Leone, who were in the midst of a very scary and real crisis.

Why I returned my medal

Although I felt privileged to be able to offer support to Sierra Leoneans during the Ebola crisis, my everyday job as a doctor in the NHS prevents me from offering support and healthcare to patients who need it the most.

New regulations that came into effect in October 2017 mean that people who can’t prove their immigration status are now charged for all NHS services upfront - with the exception of A&E and seeing a GP - at up to 150% of the original NHS cost.

The new regulations are very complicated and difficult to enforce accurately, and healthcare professionals who are already working in overstretched NHS departments do not always have time to fully comprehend them.

The upfront charges act as a strong deterrent: preventing people from accessing healthcare means that their conditions progress, become more serious, and even incurable. Ultimately, people are coming to great harm; some have even died.

What’s more, there is no evidence to suggest that charging certain groups of people for healthcare in the NHS is a financially viable option, as the cost-recovery schemes often cost more than the cost recovered. “Health tourism” has often been framed as the cause of the NHS crisis, but the Government itself recognises that health tourism actually contributes to a very small proportion of NHS budget (<0.3%).

I currently work as a sexual health doctor in East London and as a teaching and research fellow at Queen Mary University of London’s Public Global Health Unit. Although the new charging regulations do not apply as widely to sexual health (due to the risk of public health consequences) and family planning is exempt from the charges, they still compromise my role as a healthcare professional. My primary aim should be to offer care; I should not have to restrict care based on immigration status. I am a doctor, not a border guard.

Left in the most precarious of situations

Last year, I worked for Doctors of the World, a charity that campaigns about this issue and provides a free clinical service to people who are excluded from healthcare elsewhere. I witnessed, first hand, the number of people affected by these upfront charging regulations and were denied care unless they could pay upfront for non-emergency care.

There were people who were denied chemotherapy, heart operations and operations to reverse previous medical errors. There were new mothers who were confronted with bills retrospectively (on average, about £6,000 for antenatal and delivery costs). Crippled by such debts and threatened with deportation and/or the inability to reopen asylum claims, these people are left in the most precarious of situations. And to be clear, these were not people who had just arrived in the UK: on average, people who come to Doctors of the World for help have been in the UK for six years before attempting to access any form of healthcare.

A true measure of any society

Countries around the world look to the NHS as an example of a socialised comprehensive healthcare system, free at the point of access and of need, as Nye Bevan had intended 70 years ago. Increasingly, this is no longer the case. I strongly feel that the charging regulations in the NHS for undocumented migrants - particularly the October 2017 updates to upfront charging - must be reversed if we are to continue to be proud of our NHS.
As Mahatma Ghandi said, “a true measure of any society can be found in how it treats its most vulnerable members”.

Although the reaction on social media was overwhelmingly encouraging, since returning our medals a few days ago, along with a letter to Theresa May, we are yet to receive a response. It’s time we started re-examining this policy, getting rid of this ‘hostile environment’ and started humanely and conscientiously looking after the most vulnerable in our society. Until then, I cannot proudly hold on to my Ebola medal knowing that the same Government has the capacity to reverse these damaging and deeply unhealthy policies.