Queen Mary University of London (QMUL) will mark a decade of being the first UK university to become a real Living Wage employer at today’s (Monday 31 October) event at the British Library where the Mayor of London announced the new London rates, as part of Living Wage Week 2016. 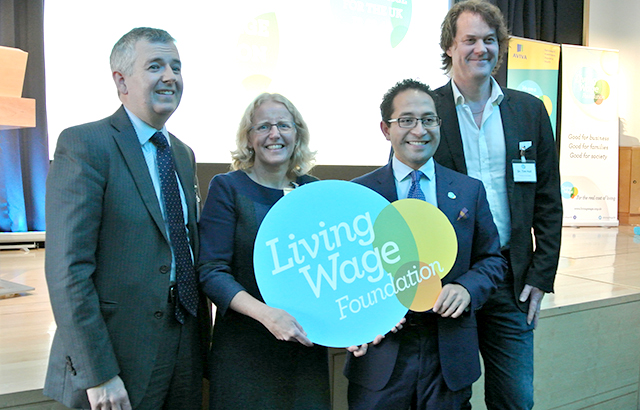 Research from Professor Jane Wills from QMUL’s School of Geography provided evidence about the impact of low pay on Londoners when the campaign started in 2001 and she has since tracked the progress of the living wage as it has moved from east London to shape national policy debates.

Sadiq Khan, Mayor of London announced today (Monday 31 October) that the new rate for Londoners has increased from £9.40 to £9.75 per hour to reflect the higher cost of living facing families in the city – an increase of 3.7 per cent.

He said: “Paying the London Living Wage is not just the right and moral thing to do, it makes good business sense too.  As many employers already accredited know, the benefits are clear - including increased productivity and reduced staff turnover.”

At the same event, Professor Wills was presented with a 15 Years Living Wage Champion award for her role in providing research and leadership on the living wage. She said: “I’m delighted to receive this award and see the London Living Wage campaign grow into a national movement.

"It’s clear that the real Living Wage can benefit everybody concerned from employees and employers as well as the tax-paying public, and it is an example of communities, business, and campaigners coming together to find practical ways of addressing working poverty and strengthening families.

"I’m also very proud of the fact it has its roots at QMUL.”

QMUL was the first accredited university in the UK in 2006 to pay a real living wage, and is also a founding partner of the Living Wage Foundation, which was established in 2011 to recognise the leadership of employers who choose to pay a real Living Wage based on the cost of living, not just the government minimum.

Nearly 3000 employers have now committed to pay this rate to all their workers, including contracted cleaners, catering staff and security guards. The initiative has lifted over 120,000 employees and their families out of working poverty.

We're proud to be an accredited #LivingWageEmployer. Our research was the 1st to show that #LivingWage increased the well-being of workers pic.twitter.com/LYd16UPHSX