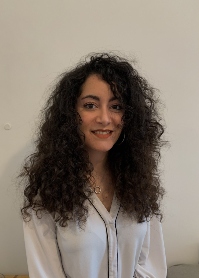 The title of Elisa's project is “Modelling ecDNA dynamics in human cells” and it is developed under the supervision of Dr. Weini Huang and Dr. Benjamin Werner. The aim of this project is to use stochastic models based on simple mechanistic assumptions to explain observed patterns in human cells, including healthy tissues and tumours. The team would try to fit experimental and clinical data of genetic information into new predictive mathematical models which, for example, could calculate the expected frequency distributions of genetic errors, the expected incidence of cells which express mutations macroscopically, the behaviour of cells populations which are affected from a specific disease.

Elisa and her supervisors wish to provide to medical research previsions about connections between the presence of a specific type of extra-chromosomal DNA and the incidence of some diseases or epigenetic traits.

The project is done in cooperation with Barts Cancer Institute of the School of Medicine and Dentistry in Queen Mary University of London.