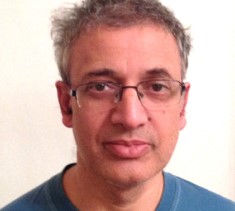 Shahn Majid’s is a leading authority on algebraic methods for quantum gravity and other fields where quantum theory and geometry collide, including Hopf algebras and noncommutative geometry. He pioneered the modern approach to the quantum spacetime hypothesis, the idea that the coordinates x,y,z,t that determine where and when an event takes place are in fact elements of a quantum algebra and hence subject to quantum uncertainty, due to quantum gravity effects. This allows one to understand the nature of physics at the mysterious Planck scale as a practical alternative to so-called Theories of Everything such as string theory. His  approach entails the generalisation of our very concepts of differential calculus and geometry to a suitable quantum Riemannian geometry, coming out of but not limited to the notion of  quantum groups (a generalisation of the concept of symmetry that he earlier helped pioneer in the 1980s). Other examples include quantum black hole models as well as noncommutative geometry more widely. Shahn Majid is also responsible for a theory of braided algebra where algebraic expressions are wired up like in a computer (and where wires can get tangled) and is currently interested in applying the above ideas to quantum information and quantum computing.

Shahn Majid is the author of 4 books. His 600 page text Foundations of Quantum Group Theory remains a bible for researchers in the field. His Quantum Groups Primer covers a lecture course from when he was in Cambridge. On Space and Time is a book of collected essays including his own and those of luminaries such as Roger Penrose and the Alain Connes. His new 2020 book, with Beggs, is an 800 page monograph Quantum Riemannian Geometry laying out the new formalism. For more details on all of the above, see his personal website http://www.maths.qmul.ac.uk/~majid

Shahn Majid was educated with 1st degree from Cambridge, including part III of the maths tripos, and with a PhD from Harvard. After a year in Swansea, he spent ten years in Cambridge and as a Fellow of Pembroke College there, moving to Queen Mary in 1999. He was Director of Pure Mathematics 2010-13 and has been an EPSRC Postdoctoral Fellow, an EPSRC Advanced Fellow, a Royal Society University Research Fellow and a Leverhulme Senior Research Fellow.  As well as regular research and teaching, Shahn Majid is joint director of the London Taught Course Centre, which provides graduate-level courses for a consortium of universities in London and beyond. See www.ltcc.ac.uk