The 29th conference on Formal Power Series and Algebraic Combinatorics (FPSAC) took place from Sunday 9 July to Thursday 13 July. The conference was organised by the School of Mathematical Sciences (SMS) in partnership with the Clay Mathematics Institute and supported by funding from the National Science Foundation. More than 200 mathematicians from around the world attended the conference, many of them PhD students to whom we were able to offer generous financial support. 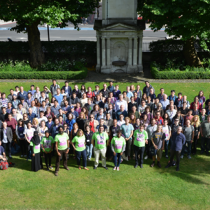 The conference series covers all aspects of combinatorics and their relation to other parts of mathematics, physics, computer science, chemistry and biology. The five most recent conferences in the series were held in Vancouver (2016), Daejon (2015), Chicago (2014), Paris (2013), and Nagoya (2012).

This year's conference featured eight invited lectures by speakers from the USA, Canada, Korea, Chile, and the UK, on subjects ranging from lattice path enumeration to symmetric functions, geometric complexity theory and algorithmic graph theory. In addition there were 28 contributed talks and 58 poster presentations selected by the Programme Committee. The conference was opened by the President and Principal, Professor Simon Gaskell, who welcomed the participants and put forward his views on QMUL's role both as an internationally leading university and an important part of our local community.

Professor Thomas Prellberg, Chair of the Organising Committee, commented that he was delighted to host FPSAC as it came to the UK for the first time. He thanked the Professional Services team in SMS for their excellent support, and gave a special mention to our Catering and Hospitality colleagues. Further information and conference photos are availalbe here(link is external).