Flight of the bumblebee decoded by QMUL mathematicians 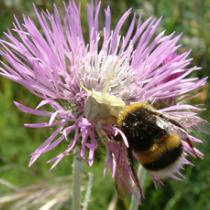 Writing in the journal Physical Review Letters, Dr Rainer Klages from Queen Mary’s School of Mathematical Sciences, Professor Lars Chittka from the School of Biological and Chemical Sciences, and their teams, describe how they carried out a statistical analysis of the velocities of foraging bumblebees. They found that bumblebees respond to the presence of predators in a much more intricate way than was previously thought.

Bumblebees visit flowers to collect nectar, often visiting multiple flowers in a single patch. There is an ongoing debate as to whether they employ an ‘optimal foraging strategy’, and what such a theory may look like.

Dr Klages explains: “In mathematical theory we treat a bumblebee as a randomly moving object hitting randomly distributed targets. However, bumblebees in the wild are under the constant risk of predators, such as spiders, so the question we wanted to answer is how such a threat might modify their foraging behaviour.”

The full news story can be read here(link is external).