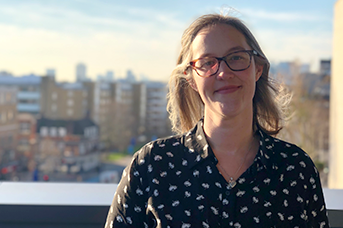 I am an historian of women and gender in modern Germany and Europe. My research focuses on the history of feminism in the twentieth century, with a particular focus on activism against domestic violence, reproductive rights, and feminism and the media.

My research broadly examines the impact of 1960s feminism on contemporary discussions of gender justice and women’s rights.

My first book, Feminist Transformations and Domestic Violence in Divided Berlin, 1969-2002, examines feminist activism against domestic abuse in East and West Germany, focusing particularly on the movement to open women's shelters. Situating domestic violence activism within a broader history of feminism in post-war Germany, it traces the evolution of this movement both across political division and reunification and from grassroots campaign to established, professionalised social service. In doing so, it asks what popular and political support for domestic violence activism has meant for feminism and the advancement of women's rights more broadly. Examining the trajectory of feminism in Germany, Feminist Transformations reveals the limitations of gender equality as advancements in women's rights were often built on the reassertion of patriarchal gender roles.

I have also led a major research project on the interconnection of feminist movements and the media at the German Historical Institute London. The International Standing Working Group in Medialization and Empowerment examines the intersection of women’s rights and the media, assessing how the media has shaped ideas and practices of women’s empowerment and mobilization. It looks at the media circulation of ideas, concepts, images and films, and how they were received and actively appropriated by women. In so doing, it focuses on the function of modern media in spreading knowledge that guides action, but also on the ambivalence and limitations of this circulation of knowledge.

I am currently developing a new project on reproductive rights, and the movement of women across borders to access abortion.

I welcome applications from candidates wishing to pursue doctoral research the history of women and gender in modern Europe and Germany, including but not limited to:

Organized and moderated a roundtable discussion on the Legacies of Feminism in Germany and India at the German Historical Institute London.