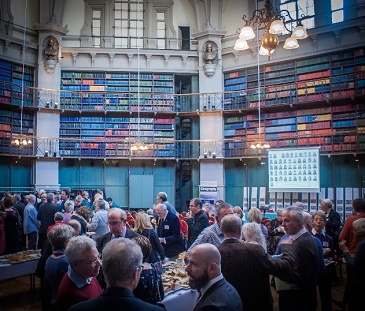 Reunion guests enjoyed catching up with each other in the Octagon

During the afternoon alumni enjoyed lunch, networking, campus tours led by geography ambassadors, as well as tea and cakes and meeting with current staff and students. Attendees included graduates from 1952 up to 2016 who enjoyed meeting up with old friends, making new ones, and catching up with each other’s news. Many commented on how much the campus has changed since they left and how impressed they were with the way the School has developed over the years.

On display, there were some archive materials, including old class photographs and exam papers that visitors enjoyed looking at throughout the day. There was also a memory board to which former students could pin their favourite memories of their time at QMUL. 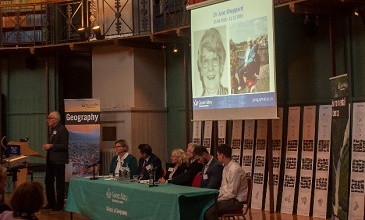 A tribute to June Sheppard by Professor Roger Lee

Head of School Professor Alison Blunt opened the event with a welcome talk, followed by a speech by Professor Roger Lee who paid tribute to the late June Sheppard. June was Lecturer and Reader in Geography at QMUL from 1953 to 1991, and played a formative part in the life of the department and inspiring generations of students and colleagues. Many guests remembered her fondly.

Next, Professors Alastair Owens and Jane Wills talked about Queen Mary and the East End of London in the past and present and our strong connection to and links with local organisations.

Professor Philip Ogden then outlined the changes to the Mile End campus and talked about the numerous capital projects and investments that took place on the Queen Mary estate in the last few decades. This was followed by a short presentation from second-year environmental scientists Jason Lynch and Will Flynn, President and Vice-President of the Geography Society – or GeogSoc as everyone remembered it. 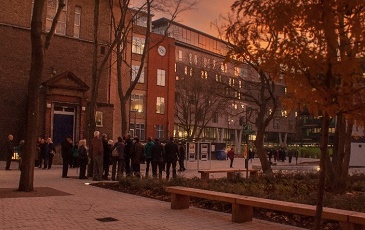 Alumni were shown around the campus by current students

Many visitors said that the highlight of the day was meeting current students and going on tours of the campus and the Geography building. The ambassadors provided a warm welcome to visitors which made a very strong impression.

As part of the day's programme, Dr Tom Slater delivered the 13th David M Smith lecture – the School’s annual lecture in honour of Emeritus Professor, David M Smith. Tom’s lecture on 'From territorial stigma to territorial justice: a critique of vested interest urbanism' was open to all alumni and friends of Queen Mary, as well as current staff and students and the general public.

Tom is also a former student of the School, graduated with a BA degree from QMUL in 1998. The ArtsTwo Lecture Theatre was almost at its full capacity with over 200 attendees. A thought provoking, topical lecture ended with some good questions from the audience and was followed by a drinks reception in the Octagon – our elegant event space which many former students remembered as the College Library. The day closed with a three-course meal in the Senior Common Room.

“I found it very inspiring to meet so many former students and colleagues. One theme that came up when talking to many alumni throughout the day was about how much we care: for our students, this part of London, and the wider world. This –and the whole day– made me feel very proud to be a QMUL geographer,” said Professor Alison Blunt, Head of School.

The School is planning to build on the success of the event and to develop stronger links with alumni. As part of this, the School is planning to develop an oral history project about the history of geography at Queen Mary, potentially as part of the new QMUL Model curriculum development. This will put current students directly in touch with alumni, will enable them to put interview research skills into practice, and will contribute to an updated version of June Sheppard’s 1994 history written for the School’s centenary celebrations.