Flame Ionisation Detector with micro Electro Chemical Detector (GC-FID/uECD), which analyses nitrous oxide, carbon dioxide and methane. A measured quantity of gas is collected from the sample vial by an automated needle and then injected into the inlet valve of the chromatography column. The chromatography column separates out gases based on molecular size. After the gas has been separated within the column the compounds are measured by the Flame Ionisation Detector.

The GC-FID/uECD is a useful instrument for analysing greenhouse gasses in samples which have been directly collected in the field or from river waters collected in the field when a head space is introduced. Alternatively, the GC-FID/uECD can be used to analyse greenhouse gas produced within the lab during experiments investigating the gas produced by bacteria from soils and sediments. 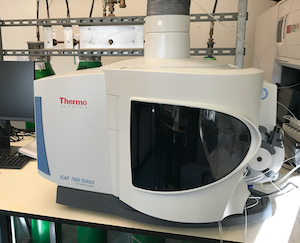 This Inductively Coupled Plasma Optical Emission Spectrometer (ICP - OES) is used for elemental determinations in liquid samples. Depending on the nature of the sample, filtered liquid samples can be run directly, acidified or digested with acid before analysis. This instrument combines a high temperature inductively coupled plasma source with an optical emission spectrometer and is capable of measuring most of the elements in the periodic table. Using an autosampler, samples are introduced into argon plasma as aerosol droplets. The particles within the aerosol are dried, atomised, ionised, excited and relaxed. Using a diffraction grating, the light emitted from the plasma is separated into its discrete component wavelengths which are detected using a Charge Coupled Device (CCD). Individual elements can be identified as they each have distinct sets of emission wavelengths. The ICP-OES can withstand a high concentration of total dissolved solids and provides a much more robust analysis for saline or heavily contaminated waters.

Fully automated carbon and nitrogen analysis system, the instrument has the ability to analyse total nitrogen, total carbon, organic carbon or inorganic carbon, in addition to the purgeable and non-purgeable species. Samples are placed within sample vials and then can injected directly into the system or pre-treated with acid for organic carbon analysis. The Formacs HT also has the ability to bubble gas through the sample and mix the sample, therefore providing purgeable and homogenised sample analysis. Samples are either combusted or dissolved within acid for analysis and cleaned through a series of internal systems before being analysed within the infra-red detector for carbon and the nitrogen detector for nitrogen. Carbon and nitrogen cycles are an important part of many ecological systems and as such the Formacs HT has many applications from river analysis to peat land systems.

This Inductively Coupled Plasma Mass Spectrometer (ICP - MS) is used for elemental determinations in liquid. Depending on the sample type, the sample may need to be filtered, acidified or digested with acid before analysis. This instrument combines a high temperature inductively coupled plasma source with a mass spectrometer and is capable of measuring most of the elements in the periodic table. Samples are introduced into argon plasma as aerosol droplets. The plasma dries the aerosol (sample), dissociates the molecules and then removes an electron giving an excess of singly charged ions. These ions are directed into the single quadrupole mass spectrometer and the exiting beam of ions is detected electronically.

River waters or sediments can be analysed, either by filtering in the field and placing directly in vials (river waters) or through a simple extraction technique (sediments). An aqueous sample is taken from the vial and injected on to the analytical separation column, where it is separated into the compounds of interest. The sample is quantified using an electrochemical detector. The Dionex system is regularly used for river water nutrient monitoring, however there are a range of applications especially when considering the nitrogen cycle.

Design to measure carbon, hydrogen, nitrogen, sulphur and oxygen within solid soils and sediments with little preparation needed. Sample pre-treatment to remove inorganic carbon can be performed for the analysis of only organic carbon.

Samples are pre-weighed, sealed within tin capsules and placed within a rotating auto sampler on the top of the unit. During operation the samples fall into a chamber which is purged of all atmospheric air, post purging the sample falls directly into the combustion tube where it is combusted to gas at temperatures between 950 °C and 1060 °C depending on the analysis taking place. The sample, now as a gas, flows into a separation column before being quantified by a Thermal Conductivity Detector. The Flash EA is used routinely to analyse carbon and nitrogen within soils and peats and can also be used to measure concentrations within plant material when exploring degradation and microbial breakdown times.

The Thermo UV-Vis Spectrophotometer is a simple but effective instrument which measures the wavelength of light passing through the sample. Depending upon the compounds within the sample different wavelengths will be produced. The spectrophotometer can be used for a range of analysis from aqueous to solid samples. Investigations into the concentrations of bacteria within soils and sediments, levels of chlorophyll and analysis of the reduced form of iron within water can be completed with the Spectrophotometer.

The focus of the Thermo FT-IR Nicolet iS10 Spectrometer is more towards solid items, the instrument measures the light absorbed or transmitted through the sample to create an infra-red spectrum. This spectrum can be used as a finger print to identify different substances or molecules. Within the Physical Geography Laboratories it is regularly used for the identification of sediments and specific minerals.

Magnetic susceptibility is a universal tool used for many applications from sediment characterisation to a proxy for monsoon strength. Within the Physical Geography Labs here we have a Bartington MS3 Magnetic Susceptability Meter with MS2B Duel frequency sensor and MS2C100 Core Logging Sensor. Our current set up allows for both small samples and entire cores to be analysed

This instrument use laser diffraction to measure the size distribution of particles in the range 0.4µm to 2000µm. Laser diffraction works by measuring the patterns of scattered light produced when a laser beam passes through a dispersed particulate sample.

X-ray Computed Tomography (CT) is a nondestructive technique for visualizing interior features within solid objects, and for obtaining digital information on their 3-D geometries and properties.

This piece of equipment is a portable, handheld X-ray Fluorescence (XRF) analyser. It can be used in the laboratory or in the field for element determination and quantification in sediments and rocks. The sample material is excited by the bombardment of high energy x-rays generated in the silver x-ray tube. Different elements in the sample respond by emitting x-rays at energies characteristic of its elemental composition.