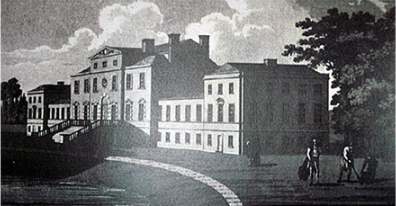 New College, Hackney c. 1790 -- Reproduced with permission of the London Borough of Hackney Archives and the City of London, London Metropolitan Archives

New College, Hackney was one of the most ambitious and controversial of the eighteenth-century dissenting academies. As the successor to the academies at Warrington and Hoxton, New College sought to offer a broad, liberal education in which its students would be allowed complete intellectual licence to pursue political, religious and philosophical truth. At the universities at Oxford and Cambridge students were required to submit to religious tests either at matriculation or graduation. At New College, however, students were admitted regardless of theological affiliation: here Anglicans, Catholics and dissenters studied alongside each other at an institution dedicated to the principle of religious toleration. As the governors declared at the end of their meeting on 18 November 1788, ‘of the Several Collegiate Establishments in Europe we know not of any other that… has been founded expressly for the purpose of teaching & maintaining the Genuine Principles of Freedom, Civil & Religious.’

The tutors and governors at the College were among the most eminent figures of the day, and many of the students went on to distinguished careers as writers, scientists, lawyers, theologians, and politicians. But the early promise of New College did not come to fruition. Its reputation as a centre of political radicalism, as a base for reformers, revolutionaries and spies, made it a target of the counter-revolutionary campaign of the 1790s. In addition, spiralling debts, acrimonious disputes between tutors, the arrest of leading College governors, and the spread of atheism among the student body led to its closure in 1796.

This online edition makes accessible for the first time a range of printed and archival material relating to the chequered history of the College. It presents comprehensive lists of its members and a detailed chronology of its history, before tracing the rise and fall of the institution from selections of manuscript correspondence, biographical memoirs, newspaper articles, and poems. As the first attempt to recover the history of New College for more than eighty years, it is hoped that this publication will foster an appreciation of the role that the College played in the religious, educational, political, and intellectual life of the late eighteenth century.

CITATION
The contents of this publication are intended for personal use only. Commercial use or publication, including e–publication, is not permitted. Short quotation for the purposes of scholarship or teaching is acceptable as long as the source is stated clearly. This publication is the copyright of Dr Stephen Burley. Citations should take the form: Stephen Burley, New College, Hackney (1786-96): A Selection of Printed and Archival Sources (2nd edn, rev. 2011), Dr Williams’s Centre for Dissenting Studies, https://www.qmul.ac.uk/sed/religionandliterature/online-publications/new-college-hackney