Dissent and the Representation of War 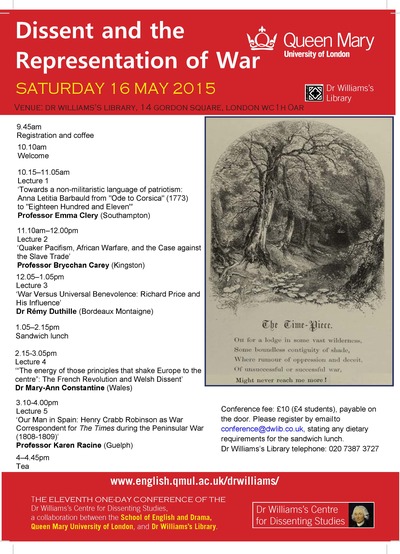 On Saturday 16 May 2015 the Centre’s eleventh annual one-day conference was held at Dr Williams’s Library on the Subject of ‘Dissent and the Representation of War’. The focus was on Dissenters’ attitudes to war and peace, from early-eighteenth debates on the slave trade pioneered by the Quakers to the Spanish Peninsular War (c. 1809).

‘Towards a non-militaristic language of patriotism: Anna Letitia Barbauld from “Ode to Corsica” (1773) to Eighteen Hundred and Eleven‘ by Professor Emma Clery (Southampton)

‘“The energy of those principles that shake Europe to the centre”: The French Revolution and Welsh Dissent’ by Dr Mary-Ann Constantine (University of Wales)

‘Our Man in Spain: Henry Crabb Robinson as War Correspondent for The Times during the Peninsular War (1808-1809)’ by Professor Karen Racine (University of Guelph)