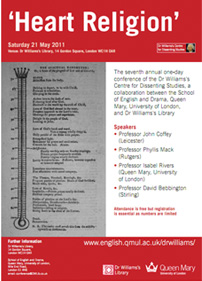 On Saturday 21 May 2011 the Centre’s seventh annual one-day conference was held at Dr Williams’s Library on the subject of Heart Religion, as treated by puritans, nonconformists, Methodists, and Church of England evangelicals, from the late seventeenth to the mid nineteenth centuries. The literary forms discussed included hymns, dream narratives, popular religious handbooks, and accounts of death beds.

‘How Novel was Evangelical Heart Religion? The Evidence of Communion Hymns, 1690 to 1750’, by Professor John Coffey (University of Leicester)

‘Inward Religion and its Dangers in the Evangelical Revival’, by Professor Isabel Rivers (Queen Mary, University of London)

‘The Deathbed Piety of Evangelical Nonconformists in the Nineteenth Century’, by Professor David Bebbington (University of Stirling)

The following collection of essays arising from the conference was published in 2016: