The Shaping of Nonconformist Architecture 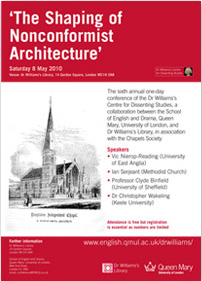 On Saturday 8 May 2010 the Centre’s sixth annual one-day conference was held at Dr Williams’s Library on the subject of chapel building by different denominations—Congregational, Presbyterian, Methodist, Unitarian, Quaker, and Christian Scientist—from the late seventeenth to the early twentieth centuries. The topics discussed and illustrated included the contribution of ministers as well as builders and architects, competition between gothic and classical models, the influence of funders on the choice of styles, and the links with European and American architecture before the First World War. The conference was organised in association with the Chapels Society and had an enthusiastic audience of over 70 people.

‘Two Norwich chapels: architecture and theology after the Act of Toleration’, by Vic Nierop-Reading (formerly head of the Conservation Group, Norwich City Council)

‘James Simpson and the shaping of Methodist architecture in the early nineteenth century’, by Ian Serjeant (Conservation Officer for the Methodist Church)

‘1862: Congregational architecture and the bicentenary of 1662. Or, how history seized the moment’, by Professor Clyde Binfield (Professor Emeritus in History, University of Sheffield)