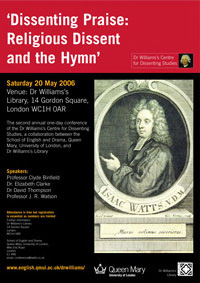 On Saturday 20 May 2006 the Centre’s second one-day conference was held at Dr Williams’s Library on the subject of religious dissent and the hymn.

The introduction of hymns and hymn-singing has been described as one of the greatest contributions made by dissent to English worship. The sixty-five attendees included academics, ministers, and church members; they came to hear four stimulating lectures, which covered a broad range of topics including the Puritan condemnation of hymns as worldly in the 1640s, the movement away from metrical psalms to hymns in the late seventeenth and eighteenth centuries, and the relation of hymnody to broader evangelical and congregational culture from the early nineteenth to the early twentieth centuries.