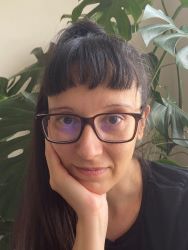 I research the politics of everyday life, and how we make sense of inconsistencies, creative attempts at navigating crises, and the possibility of building more just and inclusive futures. I have published on grassroots organising and art-activism in Bosnia and Herzegovina, the legacy of the Habsburg Empire in the Viennese Coffeehouse, and I am currently studying plant-human relationships during the Covid-19 pandemic. Theoretically, my research brings together and expands conversations on the social production of space (especially the work of Henri Lefebvre), affect, and feminist theory. I hold a degree in History of Islamic Architecture with Armenian Studies (Ca’ Foscari, Venezia), a Master in Research Architecture (Goldsmiths College) and a PhD in Sociology (Queen’s University Belfast). Prior joining Queen Mary, I was lecturer in Sociology at Queen’s University Belfast. I also held research and teaching positions at the University of Kent, The Bartlett (UCL), The Centre for Advanced Studies at the University of Rijeka (HR), the Max Planck Institute for the Study of Religious and Ethnic Diversity, and Georg August University of Göttingen (DE).

From August 2022, Giulia is the IHSS Programme Director in Environmental Futures (climate change as socio-cultural phenomenon). In this role, she will develop a 2-year programme of activities geared towards the consolidation of a space at QM that can gather, platform and support individuals interested in thinking about the future of the environment through plants.

My current research reflects on the roles played by houseplants during the Covid-19 pandemic. It asks why caring for plants became so important to people during social isolation and it studies the affective bonds created between humans and plants in order to account for vulnerability, intimacy, and the emergence of more-than-human solidarities. As part of this project, I am assembling a visual archive of multi-species homemaking practices that is accessible via Instagram IG: CareForPlants

(2019-ongoing) Feline Diplomacy: Cats and the Critique of Politics

Drawing on a netnography of cats discussing international political affairs on Twitter, this research explores how the #diplomogs, petfluencers who roam real life British Government buildings, become an interface for voicing critical discourses outside mainstream party politics. I attend to the emergence of the more-than-human in world politics to ask what cats can bring to the body politic and to explore how virtual animal voices become the means of political contestations in a digital world.

I started researching grassroots organising in Mostar, Bosnia and Herzegovina, as a PhD researcher working within the Conflict in Cities and the Contested State team at QUB (2008-13). The project took place through collaboration with Abart Mostar, a platform for art production and urban research that has been active in the city between 2009-2014. This research shaped the writing of my first book, The Divided City and the Grassroots. The (un)making of ethnic divisions in Mostar (2018) and several articles on art-activism and grassroots organising in contested societies. I continued researching the 2014 mass protests in Bosnia and Herzegovina while a Fellow of the Centre for Advanced Studies South-Eastern Europe at the University of Rijeka, Croatia (2015-16).

As fellow at the Max Planck Institute for the Study of Religious and Ethnic Diversity and a member of the Research Group Empires of Memory, I examined how memories of the Habsburg Empire reverberate in the present of four cities that were key to imperial expansion: Vienna, Budapest, Trieste, and Sarajevo. I developed this comparative research through participant observation in one of the most popular spaces left by the legacy of the Habsburg empire: the Viennese coffeehouse. My aim was to discuss how material and intangible legacies of empire are apprehended in the café, which form relationships with the imperial past that shape urban identities, the sense of belonging to history, and contemporary political discourses. In particular, I was interested in how burgeoning nationalist narratives and practices are energized by the historical reverberation of imperialism, and I traced the connections between the preservation of the coffeehouse as heritage, the celebration of empire, and nationalist discourses in these cities. As part of this research project, I co-edited with Miloš Jovanović two Special Issues on off-centring empire for the journals History of the Present and Cultural Studies (2020).

Carabelli, G. (2018) The Divided City and the Grassroots. The (un)making of ethnic divisions in Mostar. The Contemporary City Series, Singapore: Palgrave.

Carabelli, G. (2019) Habsburg coffeehouses in the shadow of the empire: nostalgia in Trieste revisited, History and Anthropology 30(4): 382-392.

19 October 2020. Carabelli, G., Houseplants were our link with nature in lockdown – now they could change how we relate to the natural world, The Conversation https://theconversation.com/house-plants-were-our-link-with-nature-in-lockdown-now-they-could-change-how-we-relate-to-the-natural-world-147637

I would be delighted to collaborate with doctoral researchers developing work on:

From 2009 to 2013 I collaborated with the platform Abart Mostar to develop the project (Re)collecting Mostar.