Sporty students at Queen Mary University of London are taking part in the launch of a football relay from London to Rio – host city of the 2014 World Cup. 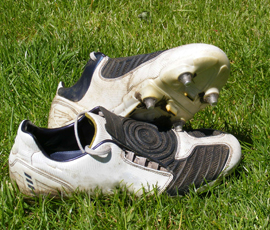 ‘The Ball’, which has been specially made in Brazil, begins its journey at 1:45pm on Thursday 9 January with a commemorative football match in Battersea Park, 150 years to the day of the first official game of football to Football Association (FA) rules at the site.

The same ball will then be used in a series of events, organised by community initiative Spirit of Football, across London, Europe and North America, through to Central and South America, bringing people together through football.

The Students’ Union will also be launching its Community Sports Programme at the Battersea Park event. The programme gives students the opportunity to gain sports qualifications and develop experience of coaching in east London schools.

The first half of the Battersea Park match will be played under the original association football rules in Victorian dress and the second half under the modern FA rules. It will involve Queen Mary Students’ Union players, Spirit of Football All-Stars members, representatives of Sheffield FC and members of the band New Model Army, who have produced the official Spirit of Football song.

On the evening of Thursday 9 January the Students’ Union will host a public Spirit of Football launch party at Drapers Bar and Kitchen, Mile End campus. The free party will have a Rio Carnival theme, with cocktails, Brazilian food and a live DJ. The video of the official Spirit of Football song, ‘A Beautiful Game’ by New Model Army, will debut.

On Friday 10 January from 1-2pm Get Active, the Students’ Union’s sports programme, will deliver a free session of football, played according to old football rules and led by the Spirit of Football, in QMotion, Mile End campus. Following the game, a seminar about the Spirit of Football project will be held in the Students’ Union Hub from 2.30-4pm.

The Students’ Union’s Community Sport programme has been funded by the university’s Centre for Public Engagement.

Sarah Sarwar, president of the Students’ Union said: "We are proud to be a part of this unique event that will connect people and communities across the world. Students care passionately about making a difference. This why the Spirit of Football is the perfect occasion to launch our Community Sport coaching programme.”

Vice Principal for Public Engagement and Student Enterprise Professor Peter McOwan adds: “I am pleased that through the Centre for Public Engagement we have been able to support the Students’ Union in their excellent community sports programmes. This partnership with Spirit of Football is a very exciting development that I know will really get people involved.”

For more information about the Spirit of Football project, visit www.spiritoffootball.com.