Two Queen Mary University of London researchers were shortlisted from hundreds of applicants to present their work to politicians and a panel of expert judges as part of a poster competition for the sciences earlier this month. 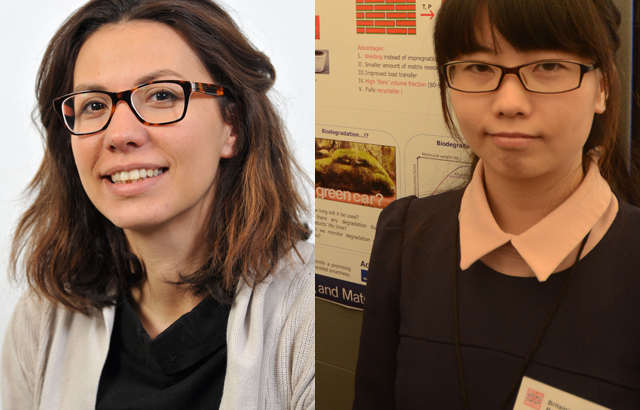 Their work was judged against dozens of other scientists’ research at SET for Britain - the only national competition of its kind.

Dr Sofia Papadimitriou, a Marie Curie Intra European Research Fellow based at the School of Biological and Chemical Sciences, presented her research on the use of polymeric nano-materials as drug delivery systems.

She said: “I find SET for Britain a great opportunity for me to disseminate my research in a wider audience as well as feedback my scientific ideas to the Members of Parliament, which are able to guide scientific research in the UK. Being invited to the Parliament is already a remarkable achievement and the overall experience will advance my scientific career.”

Miss Fang Mai, a PhD student from the School of Engineering and Materials Science, supported by the China Scholarship Council, presented her research into creating bio-based plastics as a promising green alternative to traditional oil-based plastics.

She explains: “After three years of research, the improved performances, durability and processability make the composites produced a good candidate for semi-structural applications in the automotive, general engineering or consumer product markets.

“The competition is such a good opportunity to bring Britain’s early-career researchers together and build relationships. I’ve met a lot of great researchers from different backgrounds and institutions, which inspired my research ideas.”

Andrew Miller MP, Chairman of the Parliamentary and Scientific Committee, said: "These early career engineers, mathematicians and scientists are the architects of our future and SET for Britain is politicians’ best opportunity to meet them and understand their work.”

SET for Britain is a poster competition in the House of Commons - involving more than 200 early career researchers - judged by professional and academic experts.  Presenters are entered into categories depending on their specialism: engineering, the biological and biomedical sciences, the physical sciences (chemistry), the physical sciences (physics), or mathematics.

The Parliamentary and Scientific Committee run the event in collaboration with the Council for the Mathematical Sciences, the Institute of Physics, The Physiological Society, the Royal Academy of Engineering, the Royal Society of Chemistry, the Society of Biology and the Society of Chemical Industry, with financial support from BP, the Clay Mathematics Institute, Essar, INEOS, Warwick Manufacturing Group (WMG), Germains Seed Technology, Boeing, the Bank of England and the Institute of Biomedical Science.