To mark the 10-year anniversary of Queen Mary University of London’s (QMUL) partnership with the Beijing University of Posts and Telecommunications (BUPT), the institutions have signed a letter of intent and exchanged QMUL-BUPT Joint Programme 10th anniversary plaques. 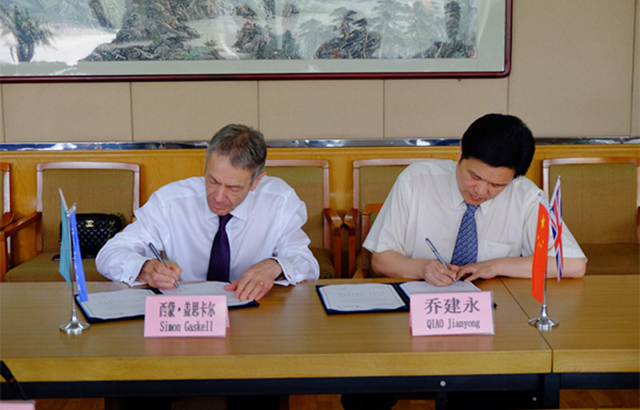 On 26 June in Beijing, QMUL President and Principal Professor Simon Gaskell and BUPT President Professor Qiao Jianyong, who were joined by delegations from both universities, signed a Letter of Intent for further development of the Joint Programme.

President Qiao Jianyong welcomed the QMUL delegation and commented that he was pleased with the achievements of the Programme and the development of the relationship between the partner universities. He explained that the QMUL-BUPT Joint Programme has won widespread praise and recognition from students and the government.

Professor Gaskell thanked the BUPT President for a warm reception and pledged continued support for the partnership.

Professor Jun Gou, Vice-President of BUPT, and Professor Jeremy Kilburn, QMUL Vice-Principal (Science and Engineering) also enhanced the partnership between the universities by signing an agreement on a joint digital media lab between BUPT and QMUL.

In 2004, QMUL partnered with BUPT to offer an innovative set of jointly run degree programmes in telecommunications, systems and networks. Students graduate with a degree from BUPT and the University of London, and teaching is split 50/50 between the universities. Originally only open to Chinese students, the programmes are now open to students from the UK and around the world.