Mortimer, the robot developed by PhD student Louis McCallum from the School of Electronic Engineering and Computer Science, has taken a key role in the prestigious Royal Institution (RI) Christmas Lectures. 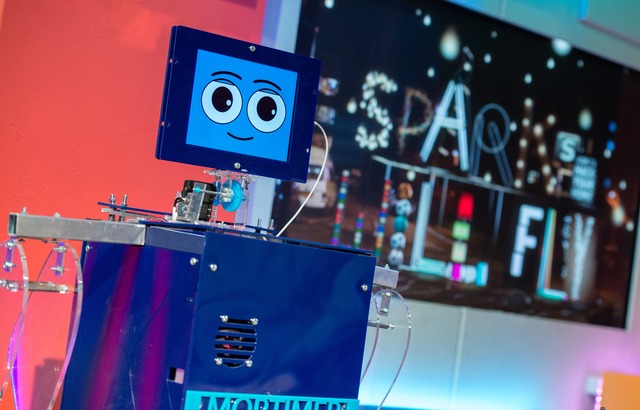 Mortimer, who develops his own drum patterns in response to human piano playing and has basic facial features and head movements, was created as part of his research into the ways in which humans interact and build social bonds with robots.

This year’s Christmas Lectures are titled ‘Sparks will fly: How to hack your home’ and are led by Professor Danielle George. The lectures will show how people are taking control of the devices we use every day, customising them and creating new things that could change the world. Using the three great British inventions – a light bulb, a telephone and a motor – Professor George will show the audience how they can be adapted and transformed into extraordinary things.
In the third lecture, which was filmed in mid-December and will be broadcast on BBC 4 on 31 December, Professor George shows how motors can be used to create a robot orchestra, with QMUL’s own Mortimer on drums!

Mortimer was talent spotted by the lecture organisers at a previous RI event and was used in the show to demonstrate how music can be programmed in computers, meaning he really got a chance to show off his skills including a one-handed drum roll.

The Christmas Lectures have been running since 1825 when they were initiated by Michael Faraday. He presented 19 series himself, establishing an exciting new way of presenting science to young people, and since 1966 they have been broadcast on television, becoming as much a festive staple as the Queen’s speech.

Mortimer’s creator Louis McCallum said, “I really enjoyed myself and was happy to hear children expressing an interest in Mortimer and how he worked. I think it's important to show the wide variety of things, including more creative projects, that can be done with engineering and programming. The final message about learning how things work and hacking them yourself was great. Thumbs up!"

The Royal Institution have made a video in which Louis explains how the development of Mortimer has supported his research.