Human Harp to unleash the voice of the Roundhouse

An artist in residence at Queen Mary University of London has developed a new instrument, once used to play the Brooklyn Bridge for its 130th birthday, which will unleash the voice of the Roundhouse during a one-off residency. 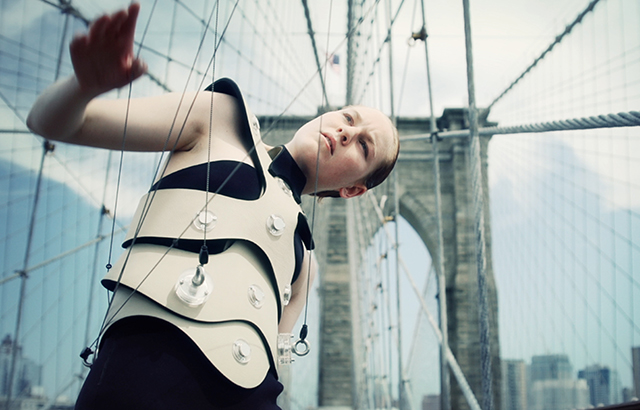 The Human Harp Live Lab is a pop-up laboratory comprised of a team of engineers, musicians, designers and dancers, led by artist Di Mainstone.

The Human Harp attaches a person to a structure via retractable strings. As the strings are pulled, the deep vibrations running through the structure are unleashed. By manipulating and twanging these musical strings the user can adjust the pitch, intensity and volume of the structure’s voice.

Electronic sensors detect the movement of the strings, which collect data such as the distance, speed, and angle as the string is pulled along. The data is wirelessly networked and used to generate the audio. The resulting sound is samples of the architecture - the resonances and other noises - being manipulated by the movement of the dancers controlling the devices.

The original Human Harp project was used to play the Brooklyn Bridge for its 130th birthday in 2013.

“We thought if the Human Harp can play a giant bridge, could it possibly play an industrial building like the Roundhouse.” said artist Di Mainstone.

She added: “The plan is use the building’s acoustics and structure to unleash the voice of the Roundhouse to make it come alive.”

The Human Harp is a collaborative project initiated by Di Mainstone, who is an artist in residence at QMUL where she works with students and researchers to create sonic sculptures that extend from the body and trigger sound. The Live Lab team includes students, alumni and researchers* from QMUL; and engineers, musicians and designers from across east London.

Di was inspired to create Human Harp when she realised the Brooklyn Bridge could be played like a giant harp. During the first phase of development she collaborated with QMUL students from the Centre for Digital Music and Media and Arts Technology Programme, digital start-up Anti-Alias, as well as twenty MA students from Copenhagen Institute of Interaction Design.

Open to the general public from 4-29 August, the residency will feature talks, workshops, and pop-up performances. Visitors will be invited to test twelve new Human Harp instruments that have been developed specifically to play the structure of the Roundhouse.

The Human Harp Live Lab is funded by Queen Mary University of London (QMUL), the Engineering and Physical Sciences Research Council (EPSRC), the Arts Council’s Grants for the Arts, and the Roundhouse.

*The team members from QMUL include: