Students from schools across London, Hertfordshire and Kent enjoyed an exciting day of hands-on fun activities at the Salters' Festival of Chemistry at Queen Mary University of London on Wednesday 14 May. 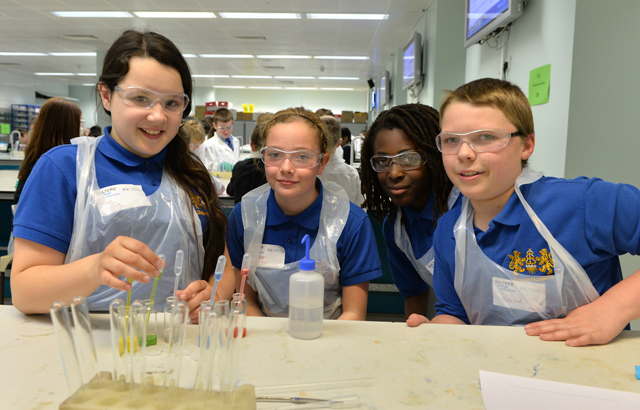 Teams of four pupils aged from 11 to 13 years old from 20 schools used their analytical chemistry skills to solve a crime as part of the Salters' Challenge: ‘The blot strikes again’.

The students saw a flash-bang demonstration using liquid nitrogen and dry ice in a fun lecture given by senior chemistry research technician Jalal Hamdan at QMUL’s School of Biological and Chemical Science. They were intrigued to see the effect of cooling various everyday objects down to –196°C, including an inflated balloon, rubber tubing, flowers, and air itself, which enabled the students to see liquid oxygen.

In the afternoon, they took part in the ‘University Challenge’, a practical activity, which required them to distinguish between coloured aqueous solutions having different densities.

The day ended with a prize giving ceremony where all participants were given individual prizes and participation certificates, and the winning teams won prizes for their schools. Drapers’ Academy from Romford won 1st prize for the Salters’ Challenge while St. Paul's Girls' School from Hammersmith won 1st prize for the University Challenge. Professor Richard Pickersgill, Head of the Division of Chemistry and Biochemistry presented the prizes to the winning teams.

Chemistry lecturer and event organiser Dr Tippu Sheriff, said: “I was extremely impressed with all the students that have taken part in the competition with their enthusiasm, knowledge and curiosity for today’s event, and hope many of them will consider studying science at university and choose scientific careers in the future.”

The Salters’ Festival of Chemistry at QMUL is one of a series of 47 festivals taking place at universities throughout the UK and Republic of Ireland between March and June 2014.

The festivals are an initiative of The Salters’ Institute, whose aim is to promote the appreciation of chemistry and related sciences among the young.