Queen Mary University of London (QMUL) graduates debuted a new scheme of academic dress this year, after the university exercised its degree-awarding powers for the first time. 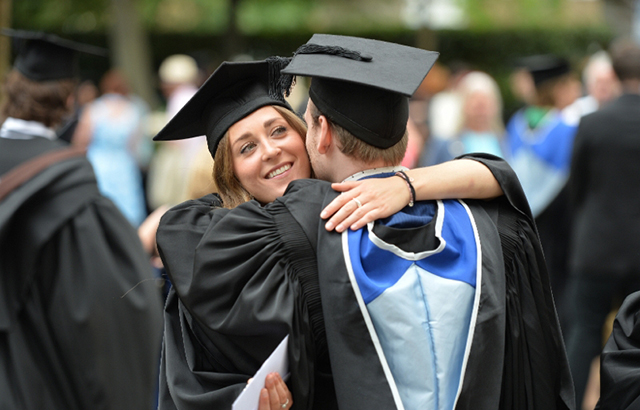 In previous years, QMUL students received degrees from the University of London, and wore its long-established dress scheme to receive their awards.

For the graduating class of 2014, Marston Robing formed a group with staff and students to design a distinctive new scheme for QMUL, reflecting the history, traditions and imagery of the institution.

The design also reflects the dynamic, diverse and modern feel of QMUL and its east London home.

The use of ‘Queen Mary blue’ was agreed to be a common factor on hoods for all bachelors, masters and doctorate gowns, with exception to students graduating from the School of Medicine and Dentistry. For these gowns, inspiration came from the striking black and white chevron of the School’s shield. 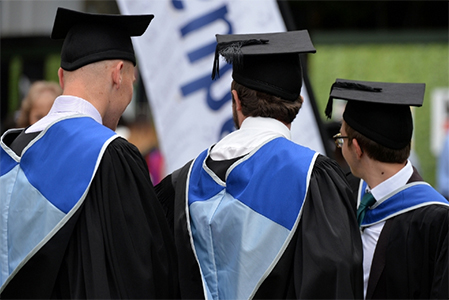 Red, silver and white were also brought in to reflect the fact that they frequently feature in QMUL crests and imagery. The designers managed to introduce the white by including a shot taffeta of white and blue. Silver was used to edge the bachelor hoods and red to edge the masters hoods, to distinguish between the two levels. 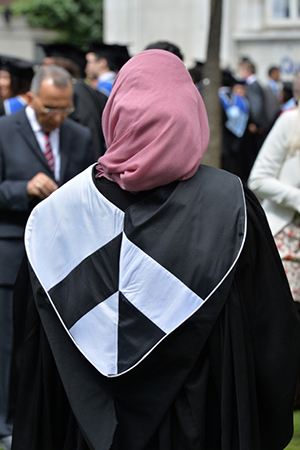 Professor Peter McOwan, Vice-Principal Public Engagement and Student Enterprise at QMUL, commented: "For me one of the really special parts to this design project was that we were able to team up staff and students to co-create these fantastic new designs.

“As I watched the students and their friends and parents celebrate their degree successes in the art deco splendour of our Great Hall I was struck by how the designs we penned on paper had come to life in such a spectacular way and how we had created a new Queen Mary tradition, looking confidently to the future while drawing on the firm foundations of our past.”

Gaby Dale Leal, Vice President Education, Queen Mary University of London Students’ Union, said: “It was great to be involved in the whole design process. I have been so happy to see students wearing the new gowns and we’ve had incredibly positive feedback from the students about the designs and how they really feel proud of their institution and the education they have received.

“By changing robing suppliers we’ve also been able to reduce the price of robe hire by £8, thus saving our students some money too!”