Many of the images of pro-Russian demonstrators in Ukraine, from Crimea to Donetsk, have shown them wearing black-and-orange-striped ribbons. The symbolism here is opaque to most Western observers, it is the “George Ribbon”, from a Tsarist-era medal for bravery that was reinstated under a different name following the battle of Stalingrad in 1943. 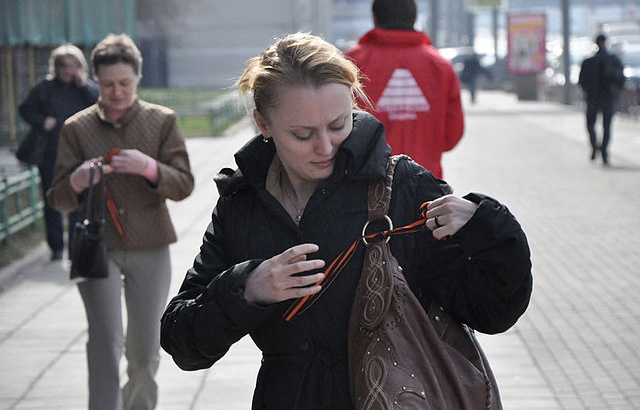 It reverted to its original title in the post-Soviet era, and ever since the 60th anniversary of the end of World War II, the ribbon has been widely worn in the run-up to the Russian national holiday of Victory Day, on 9 May.

It is often displayed on lapels or car aerials, recalling both the British remembrance-day poppy and an England football flag. It is a sign that the wearer remembers the war, and the price paid for Russian victory – not Soviet, and certainly not Allied, but definitively Russian.

All parties have been drawing historical analogies to interpret the Ukraine crisis: Hillary Clinton and western commentators have compared Putin to Hitler, the annexation of Crimea to the Sudetenland, and referred to appeasement. The Russians insist that the pro-European Ukrainians are fascists.

While the presence of the genuine neo-Nazis of the Svoboda party in Ukraine’s interim government is undeniable, it seems paradoxical that both the West and Russia legitimise their positions by reference to World War II, and opposition to the Nazis. To understand this situation better, it helps to examine quite how different Russian and Western memories of the war really are.

As the West recalls it, World War II saw democracy take a stand against tyranny – but only after prevaricating through appeasement, at the immediate cost of Czechoslovakia and the ultimate price of the Holocaust. The war’s main lesson is the importance of universal human rights, and the need to oppose expansionist dictators intent on small annexations or lesser crimes before they invade at will and commit mass murder

From the Russian perspective, when it is discussed at all, appeasement is seen as confirmation of Western hypocrisy, and as the factor that drove the Soviets to sign a non-aggression pact with Hitler in self-defence. But in Russia, the real story of World War II begins with the Nazi invasion of the USSR in June 1941. The victims of the unchecked rise of Nazism are not so much the Jewish population of occupied Europe, but rather Russia and Russians. They were both the Nazis' primary victims and the principal heroes of their defeat. Fascism is therefore not seen in terms of its anti-Semitic and anti-democratic dimensions, but as an anti-Russian phenomenon springing from Western Europe.

Consequently, the Russian media frequently use the label “fascist” for anyone hostile to Russia, the Russian language, Russian people, Russian speakers, or the interests of the Russian state. It is a synonym for the recent coinage “Russophobia”, echoing the term Islamophobia; it is evidently open to abuse, and allows for the silencing of any criticism of Russia.

There is, of course, an important element of truth to the worldview it implies. The Soviet role in defeating Hitler is often understated in the West, and the killing of three million prisoners of war, more than five million non-Jewish civilians, and two million Soviet Jews in the Nazi-occupied Soviet Union are all facts often neglected, albeit never denied, in Western discussions of both the war and the Holocaust.

But this view of the war also means that someone who holds extreme right-wing Russian nationalist views is also by definition an anti-fascist. They may espouse anti-Semitism and homophobia and contempt for democracy, free speech, human rights and the rule of law – but as long as they oppose many Ukrainians' aspiration to European integration and European-style democracy, they are opposing fascism.

Paradoxically, those on the other side also see themselves as re-fighting World War II in their attempt to oppose the rise and expansion of an authoritarian ruler, in this case Vladimir Putin. In Europe, the legacy of World War II is more ambiguous than casual analogies with appeasement, or the presence of so many George Ribbons, would imply.

Dr Jeremy Hicks is Reader in Russian Culture and Film, the School of Languages, Linguistics and Film at Queen Mary University of London.