Why Holocaust films impel us to vigilance

In the digital age, smartphones are ubiquitous with 24-hour rolling news, their camera lens contributing to the narrative of world events. 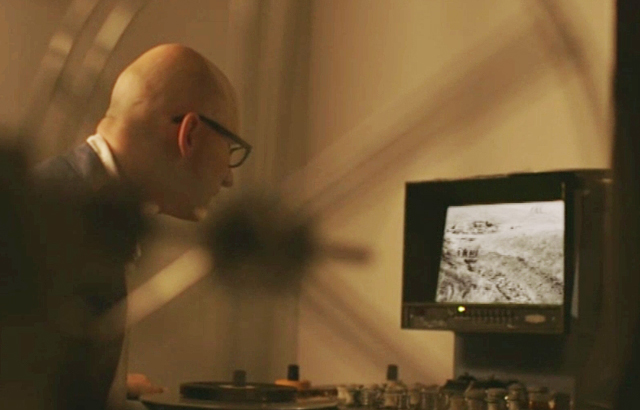 Only this week, mobile footage of violent protests in Syria and the Ukraine was beamed around the globe, hitting our screens in an instant.

Is witnessing so many atrocities and historic moments ironically now numbing our reactions to the suffering and pain of humanity?

Perhaps we take this unprecedented ‘on-the-ground’ access for granted, assuming it has been the same since the dawn of the film era?

As a film historian, I know that film reportage was scarce in the first half of the 20th century, even for World War II.

Many people wrongly assume that shocking newsreel footage of US and British troops liberating concentration camps in 1945 is the first film record of this dark period in our history.

Soviets, in fact, began documenting evidence of these crimes from 1941 as they recaptured towns from the Nazis.

In doing so, they recorded an early stage of the Holocaust that is often overlooked: the mass killings of Jews - mostly by bullets - and their burial in mass graves by mobile killing squads.

Through detailed research in Russian archives, I re-discovered a collection of these Soviet films. Analyzing them has provided a wider and richer understanding of this first phase of the Holocaust, which is missing from the dominant Allied narrative.

Not only a documentation of war crimes, this footage was also intended to stir the emotions of Soviet audiences, spurring them on to victory, on both the battlefield and factory floor.

These were clearly propaganda films, shot and edited to emphasise Holocaust victims as Soviet citizens, and not Jews. The Soviets, like the Western Allies, tended to assume their people would not be inspired to fight solely to save the Jews.

A growing Soviet anti-Semitism in post-war years led people to assume that they had no recorded images of the Holocaust.

For these reasons, the Soviet newsreels have been largely ignored and dismissed by Holocaust historians over the last 70 years.

With the benefit of hindsight, however, and a comparison with written sources on these horrific events, it is obvious that despite their propagandist purpose, these films do record genuine atrocities committed by the Nazis.

By looking again through this footage - at the mass shootings in the former Soviet Union, in Ukraine, Russia, Belarus, and the Baltic States - we can also see the way that the killings escalated.

The means of murder became increasingly industrialised and impersonal, moving from firing squads, to mobile vans, which gassed their passengers. All were precursors to the gas chamber. Disturbingly, and disappointingly these crude methods are similar to those employed in more recent acts of genocide, such as those in Rwanda and Bosnia.

While the world’s failure to prevent genocide might cause us to question such widespread annual attention to the Holocaust, the truth is that we did not even have a vocabulary with which to identify and condemn such crimes until 1945.

These films caught my attention because they appeared to show the initial process by which humanity grasped the gruesome reality of the Holocaust. The footage helps us to think beyond our habitual sense of the genocide of the Jews, and impels us towards vigilance.

Jeremy Hicks, Russian film historian at Queen Mary, is author of First Films of the Holocaust: Soviet Cinema and the Genocide of the Jews, 1938-46. A new documentary, The Unseen Holocaust, features research findings from this award-winning book. The film airs on H2 channel on Sunday 26 Jan, the eve of Holocaust Memorial Day.