Captured spies, two-penny dinners, the suffragettes, and the rallying cry of war. These are among the many stories that offer a glimpse into East London life a century ago, in the shadow of World War One. 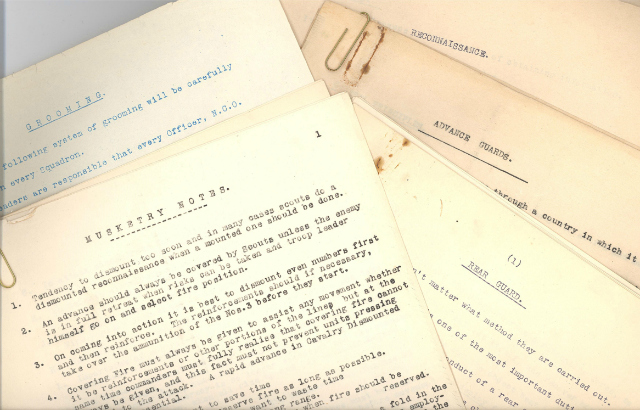 At Queen Mary University of London, a group of student researchers are using local archive material to bring these stories to life. With the help of academics from QMUL and local archivists, the students are digitising newspaper articles, diaries, government records, and letters from the front.

Throughout the commemorative period, the project team will publish daily accounts of East End life during World War One.

The East End at War project began in accordance with the anniversary of the outbreak of war. Stories and articles from 1914 reflect the complex public mood of the time: sometimes patriotic, determined in parts, but also ambivalent, fractious, and resistant to the harsh realities of war.

According to the Eastern Post, Saturday 19 September 1914, prospective recruits were united in their enthusiasm for what was regarded as a right and just war.

“Patriotic feeling ran high on Tuesday night, when a recruiting meeting was held at Lime house Town Hall. The platform was an influential one, and the body of the hall was crowded. The speeches, without exception, were eloquent and forceful, their dominant notes being condemnation of the German War Lord’s criminal recklessness in forcing war upon Europe, detestation of the frightful and barbarous outrages committed by his troops upon innocent non-combatants, and the expression of a determination to see this thing through.”

“The great hall was crowded, the national anthem was played and loud cheers greeted Mayor Crow, who was accompanied by the boroughs recruiting staff on stage, Mr Masterman, Mr Ernest-Wild and Captain Anwali-Passingham. Baron de Forest, local MP, wrote in a message that was read out by the Mayor to great applause by the attendants; ‘I cannot attend your meeting this evening. As soon as war broke out I offered myself for active service. My offer has been accepted, and I expect to be sent out almost immediately.’”

The material reflects though, even at this early stage of the conflict, a glimpse of the suffering, mourning and struggle which would creep into the lives of Londoners as the war years rolled on. A letter from the front, published in the East Ham Echo, gave an insight into the bloodshed abroad.

“I dare not enter into the details of German atrocities, as East Ham people would have a nightmare. I cannot give you any more details, only it is awful, and only one word to describe it, and that is ‘Hell.’ I have written this on paper taken from the dead Frenchman’s notebook. I took his kit bag and used the shirt out of it as mine was saturated with blood.’”

Dr Patrick Longson, Teaching Fellow at QMUL’s School of History and academic lead for East End at War, described the project as an “exceptional opportunity for students to get intensive archival and documentary experience”.

“It delivers hands-on training but also provides an insight into what life was like in the local area a century ago. It’s a project we’re very proud of. It’s not just about experience gained; it’s also about providing a lasting resource for the local community and telling stories that might otherwise have remained hidden and buried in the archives,” said Dr Longson.

According to Maya Bhogal, one of the student researchers who volunteered for the project, the experience has been “extremely enjoyable and immensely valuable”.

“I tried to choose the articles which most interested me, for example a story about suffragettes protesting to the Queen against force feeding, because it tracks the struggle of women for equality.”

“At first, the task of filing through a newspaper trying to find a worthy article appeared intimidating. But what I found was that all the local newspapers only had a few broadsheet pages of actual news in each issue – the rest being full of adverts.

That was something I found very interesting, because it is so easy to look back and forget that many of the things we consider commonplace today were part of everyday life then too. Whilst there was still total war, many shops carried on selling regular items, and people were still looking for wardrobes, bicycles, places to stay and shoes.”

The project is the latest in a series of academic, research and public engagement initiatives that will take place at QMUL during the commemorative period, which runs to 2019.

Both Hackney Archives and Tower Hamlets Local History Library and Archive have provided ongoing support and advice to the East End at War project. By opening up their archives to our researchers, as well as provided archival training, their support has proved invaluable. Both archives offer outstanding and accessible resource for researchers in many interest areas.