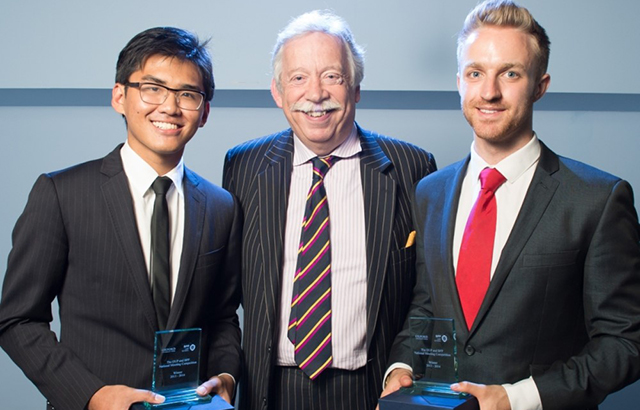 The team emerged as worthy moot champions from a pool of talented student advocates from 74 universities, each putting up an admirable fight. The winners received a certificate, trophy and £750 each.

The OUP and BPP National Mooting Competition started in October last year. Queen Mary progressed through the four rounds to win the final round ahead of LSE, Aston and Kaplan.

His Honour Judge Charles Gratwicke of Chelmsford Crown Court presided over the final and kept the students on their toes with some keen questioning. In his summing up, Judge Gratwicke praised the hard work and depth of knowledge the students demonstrated, saying: "You have displayed an exceptionally high standard of advocacy skills and the differences between the teams are paper-thin. You will all be successful because people of quality always find their niche.”

Paul Gascoyne, Senior Outreach Manager at BPP Law School said: “Many congratulations to Mr Dyson and Mr Low on their well-deserved victory. The effort they put in was clear to see and they have represented Queen Mary and their tutors with distinction.”

Stella White of OUP, who administers the tournament, said: “We are proud to provide a platform for law students from around the country to practise and hone their advocacy skills. This was a very enjoyable night of mooting indeed: our thanks to our eight finalists for making it so. Thank you also to each and every one of the students who, with the support of their law schools, have participated in the OUP and BPP National Mooting Competition 2013-2014. We can’t wait to welcome them back next year."

The fictitious moot problem was a criminal division appeal, focussing on an incidence of marital coercion which led to a conviction for rape for the husband. It was praised by the judge as an interesting and topical exercise that enabled all the finalists to shine as advocates. All the moot problems for this year’s competition were written by Rory Clarke. Rory is a barrister, currently serving as a military prosecutor at the Service Prosecution Authority. He was part of the winning City University London team at the OUP and BPP National Mooting Competition 2010-2011.

Teams wishing to enter the 2014-2015 competition can register their interest by email to mooting.uk@oup.com.