Peopling the Palaces – an eclectic two-week arts festival, jam-packed with an exciting selection of contemporary international works – returns to Queen Mary University of London from 2-15 June. 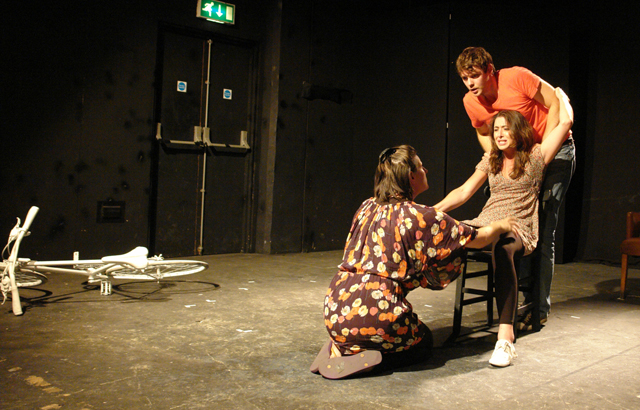 A scene from 'The White Bike'

Taking place at QMUL’s Mile End campus, the festival welcomes a host of performers, academics, curators, authors and artists from across the globe to share their work.

Highlights include a showcase performance of The White Bike, a play inspired by the death of cyclist Eilidh Cairns, which aims to raise awareness of the dangers of city bike-riding.

Written by Tamara von Werthern, the play forms part of a cabaret night of short performances on June 11, including pieces by Air Suppliers and other QMUL Drama alumni, and  featuring new works by Claire Nolan, Sh!t Theatre, Anais Lalange and Figs in Wigs.

Produced by Air Project and funded by the Centre for Public Engagement at QMUL, further festival highlights include; a day of discussion and performance on feminism and live art; evening and weekend screenings of films chosen by QMUL Drama and Film academics; Footage, a video installation that explores the tactility of human feet, and how they connect us to the world; and u see the image of her I, an exhibition demonstrating the technique of pinhole photography.

QMUL Drama students have the opportunity to showcase their work at First Flight in the Pinter Studio on 10 June - a free event hosted by the notorious Tammy WhyNot. Students and graduates are also invited to attend A Runaway Long Table on 11 June to discuss life, work and survival in the arts.