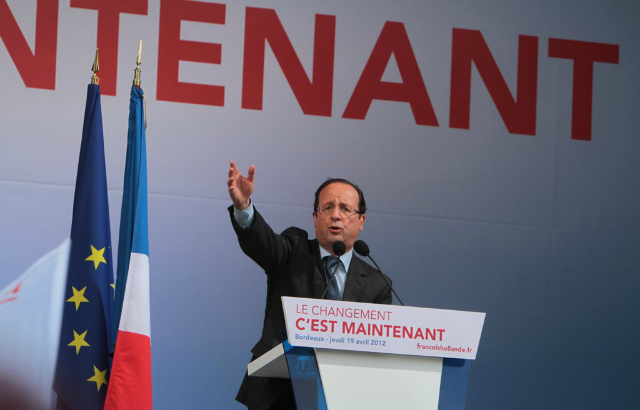 In his classic comedy “Tartuffe, or The Impostor,” Molière shows that allowing pride, rather than reason, to dictate one’s actions invariably ends badly. French President François Hollande appears to have an advanced case of Tartuffe’s malady, repeatedly making political pledges that he cannot honour, partly because of factors beyond his control – namely, the European Monetary Union (EMU) – but mostly because he lacks the determination.

For France, the consequences of Hollande’s failures will be much more dramatic than his political downfall. Indeed, the country could be facing catastrophe, as Hollande’s actions risk miring the economy into sustained stagnation and driving an increasingly angry French public to elect the far-right National Front party’s Marine Le Pen as his successor

France’s economic policies are untenable, meaning that both of the main determinants of those policies, the EMU and Hollande’s approach, must change radically. So far, that does not seem to be happening.

Earlier this month, an opinion poll showed Hollande’s approval rating plummeting to 12% – the worst result for any French president in the history of modern polling. On the same day, Hollande gave a long televised interview in which he combined admissions of failure with new promises.

Consider unemployment, which in September stood at 10.5%, compared to only 5% in Germany. In the interview, Hollande acknowledged that, despite his pledge, a reversal of the negative employment trend “didn’t happen” this year. (He failed to mention that he had set the same goal last year as well.)

France’s unemployment problem is the result of leviathan labor regulations (the labour code runs 3,648 pages) and, above all, a crippling tax burden on labor. Hollande’s main new promise – not to impose any new taxes, beginning next year – might have been an implicit acknowledgement of this.

In the meantime, however, there will be an increase in diesel excise duties, and a 20% surcharge on property taxes will be imposed on unoccupied second homes in densely populated areas. Because these tax hikes will likely be approved by the end of the year, they should be the last – if, that is, Hollande follows through on his pledge.

Given Hollande’s track record – the tax burden has risen by €40 billion ($50 billion) over the last two years – it seems unlikely that he will. Indeed, Hollande’s own officials are already back-pedaling, with the budget minister, Christian Eckert, stating that more tax hikes could not be ruled out: “You can’t set in stone a situation that depends on an international context that we don’t control.”

Of course, that “international context” is the EMU, which places considerable external constraints on French policy. Even without such constraints, it is only prudent for fiscal policymakers to keep their options open.

Either way, the euro’s creators were wrong to expect that the common currency would promote economic and political convergence among its members. By ruling out exchange-rate adjustment to address differences in competitiveness, the euro has forced less competitive countries to pursue painful and slow “internal devaluation” (suppressing real wages). This has driven down demand and prices, causing the disparities among Eurozone member countries’ economic performance to widen. France now has a 2%-of-GDP current-account deficit, compared to Germany’s 8%-of-GDP surplus.

The deflationary impact of internal devaluation is compounded by the rule, reinforced in the 2012 'fiscal compact,' that Eurozone countries are wholly responsible for their own debts and thus must adopt strict budgetary discipline. With demand relentlessly squeezed, not even depressed wages can generate adequate employment.

The only solution, many euro supporters now contend, is full political union, which would allow for fiscal transfers from the Eurozone’s more competitive countries to their weaker counterparts. But southern Italy, which has not used the fiscal transfers from the north on which it has long depended to transform its economy or boost productivity, demonstrates how little impact this approach can have. The notion that a Eurozone fiscal union could do better is a dangerous fantasy.

Another potential approach would be for strong Eurozone economies, especially Germany, to support productivity-enhancing structural reforms in less competitive countries like France and Italy. This is probably what German Chancellor Angela Merkel meant when, in private discussions at last December’s European Council meeting, she reportedly said that, though Germany “cannot afford transfers to the whole of Europe,” it can “help to pay the doctors’ bills.”

But, sooner or later, the weaker economies will probably opt out of such reforms, reclaiming their monetary sovereignty as a necessary – though far from sufficient – means of averting economic and social breakdown.

In the meantime, Hollande will continue to channel Tartuffe. Locked into the single currency, mainstream French politicians’ powerlessness to take real action renders their promises worthless. As a result, France can expect popular protest, as well as a further increase in support for more extreme parties – above all, Le Pen’s National Front.

Brigitte Granville is Professor of International Economics and Economic Policy at the School of Business and Management, Queen Mary, University of London, and the author of Remembering Inflation.

This article was co-written by Hans-Olaf Henkel and first appeared on Project Syndicate.