Economic and social future of Ukraine hangs in the balance

As the nation prepares to elect a new parliament on 26 October, Dr Eleanor Bindman, specialist in Russian politics and Research Fellow at QMUL’s School of Politics and International Relations, looks at what might lie ahead for the region. 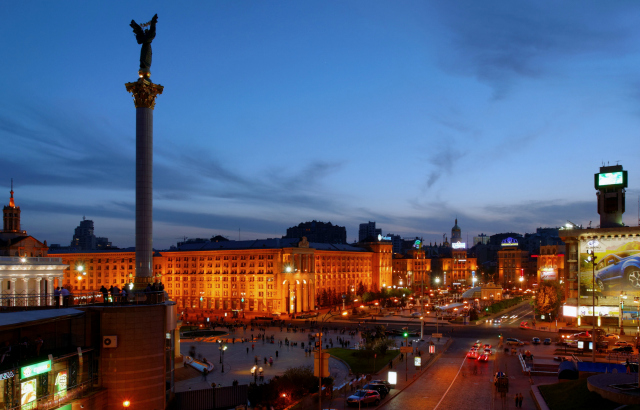 Thousands of Ukrainians are dead, parts of the country have become a conflict zone and its economy and political system is in chaos. It is difficult to overstate the trauma that 2014 has delivered on Ukraine and its people

It was a freezing cold week in February when a decade of simmering tension and bitter disappointment boiled over. Protests which began in November 2013 finally brought down a President, destabilised an entire region, and sparked a conflict that threatened to redraw maps untouched since the dissolution of the Soviet Union.

“In many ways the 2014 crisis reflected the unfinished business of the Orange Revolution a decade ago. That period introduced large-scale public protest to Ukrainian politics, along with the notion that the electorate almost has to choose between Russia on the one hand and Europe on the other,” says Dr Bindman.

The popular narrative is that Ukraine is locked in a political and emotional tug of war between those who see the country’s future in Europe and the West, versus Russian-speaking traditionalists in the east of the country who identify primarily with Russia. Dr Bindman argues that while there is some truth in this depiction, it is a simplistic portrayal of a country with a much stronger sense of nationhood than we might believe.

“Ukraine’s borders are - in most people’s minds, if not practically - very secure. Despite the impression you might get from the media, the conflict highlighted for many people that they are Ukrainian. Many see their future in Europe, while others undoubtedly look east to Russia, but the vast majority see themselves as not European or Russian but Ukrainian.

Dr Bindman argues that even in the east of the country, where the population tends to identify more closely with Russia, there is little support for full secession.

“Many people in the region were extremely alarmed by what they saw as a political coup in Kyiv and were anxious to preserve their strong cultural ties with Russia. Despite this, even at the very early stages of the crisis in March-April, only about a third of the population in those regions genuinely supported the rebels. I’d say that now, support for the rebels is very, very low. It’s hard to overstate how completely devastated those areas are: three and a half thousand people are dead, cities are almost destroyed, with wrecked infrastructure and ruined public services. There are very few people now anywhere in the country who would want to see that continue.”

According to Dr Bindman, the rebels have also failed to develop a political support base in those contested areas.

“They’re not politicians in the traditional sense. Most had no previous political experience. Indeed many had no formal military experience either. Really, they were useful idiots for the Russian government. They had legitimate grievances, but the way that they’ve expressed it locally has alienated people. They don’t have much of a following."

The election and the future of Ukraine is not just about a hearts and minds struggle between east and west. It is, according to Dr Bindman, more prosaic than that.

“Ukrainian politics is intensely corrupt. There was a lot of hope after the Orange Revolution in 2004 that Ukraine was going down a more traditionally democratic course, and that turned out not to be the case. What’s happened in the last year is a reflection of a wider loss of hope amongst the electorate. That’s why the parliamentary elections are so important. If Ukraine fails to deliver a more just society and politics, then further protests are inevitable.”

Much has been written about the threat from Russia. Following an effective invasion in the east of the country and the annexation of Crimea, some commentators have argued that the region has the potential to reignite Cold War divisions and tensions. So are we witnessing the early stages of a new Cold War?

“No. Crimea is not a useful indicator of how things will play out. One of the mistakes that’s been made in the media outside of Ukraine and Russia is the implication that Putin is mad, or that he’s some kind of megalomaniac. At the time of the Crimea annexation there were a lot of comparisons made with Hitler and the annexation of Czechoslovakia. He’s not Hitler. His involvement in the conflict in Ukraine was profoundly cynical, but it wasn’t a full scale military invasion.”

Dr Bindman argues that if Crimea was indicative of Putin’s intention to invade, then he would have done so when Ukraine was at its weakest.

“At the height of the conflict, Putin is reported to have told José Manuel Barroso, President of the European Commission, that if he so wished, Russia could take Kyiv in a fortnight. That is absolutely uncontested. If Putin wants to invade he will, and he’ll win. He doesn’t want to, which is why it hasn’t happened. It’s hard for us to understand but for Russia, Ukraine started out as a relatively low level and low risk conflict.”

So why then, did Putin expend so much reputational capital for so little strategic gain?

“You can’t look at Putin’s actions in Ukraine without understanding domestic Russian politics. When he changed the constitution to run for President for a third time and then won elections - widely perceived to be fraudulent - we saw urban, middle class street protests in Russia. Putin was rattled by these protests. Russia is not Ukraine, you don’t tend to get large-scale public protests there. His response was to be even more conservative, and to focus on traditional values and ideas that tend to play quite well with Putin’s support base.”

“The annexation of Crimea resonated with the domestic audience. His popularity – which has always been pretty high – is now around 86 per cent. So I think a lot of the Ukraine issue was about domestic pressure. It’s really not about restoring the Soviet Union, it’s not a new Cold War. It’s very easy and tempting to fall back into these stereotypes, but it’s not accurate.”

In terms of the next few months, Dr Bindman does not foresee a re-escalation of the summer’s conflict although she says the current ceasefire in the region is “extremely delicate and fragile.”

“A commentator whose work I follow has said that he can see Ukraine going down the road of Northern Ireland; where it becomes a frozen conflict. I think that’s quite likely because you’ve got rebels and agents with access to weapons and they are more than happy to use violence in the pursuit of political objectives which will obviously continue to provoke a reaction from the Ukrainian authorities."

"The other problem is that Ukraine is completely and utterly broke, and the government has such a massive job repairing wrecked infrastructure, rebuilding roads, opening schools, tackling unemployment and encouraging investor confidence. If the establishment ignore corruption and fail to tackle those social and economic fundamentals, we may well see a return to wide scale protests and violence,” said Dr Bindman.

Dr Bindman is a specialist in Russian politics and will be a Leverhulme Early Career Fellow at QMUL from 2014 to 2017. Prior to this she was a Lecturer in Politics at the University of Manchester.

Her PhD in Russian and EU Politics, which was completed at the University of Glasgow in 2013, looked at the role played by human rights issues within EU-Russia relations. She is a fluent Russian-speaker and has worked and travelled extensively in Russia and elsewhere in the Former Soviet Union. She tweets @EleanorBindman