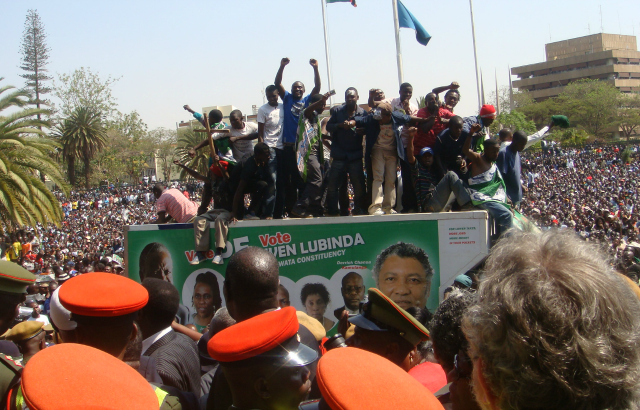 The death of Zambian President Michael Sata, while not a huge surprise, has sparked off a chain of unusual events which threaten to destabilise the country.

Sata, known as ‘King Cobra’ for his acid-tongued denigration of his opponents, died on 28 October, leaving in his wake a potentially troublesome constitutional conundrum. His failing health had been a subject of open speculation in Zambia and diplomatic circles.

Sata was an outspoken and argumentative extrovert, known for inflammatory statements about pan-African politics and western colonialism. On one occasion, he reportedly berated the then US President George W. Bush for being 15 minutes late to a meeting, and said that he wouldn’t have bothered waiting were it not for the Americans’ money.

Thus, his absence in recent months from key international and domestic events gave rise to suggestions that he was seriously ill, and that he was only nominally leading the Zambian government. His absence from celebrations marking 50 years of independence further reinforced this widely held perception.

In the end, it seems that Sata deteriorated quickly, and he died not in Zambia, but in the exclusive King Edward VII hospital in London. It is understood that he had previously received treatment over the summer in Israel and New York

While his death may have been anticipated, Sata’s decision making whilst at the head of government has resulted in considerable political unrest in recent days.

At the time of his election in 2011, Sata generated considerable controversy and bemusement when he appointed Guy Scott, a Zambian white man, born to Scottish parents, as his Vice President.

The Zambian constitution states that in the event of the President’s death, the Vice President must ‘act up’ into the role until a new leader is elected. It is stipulated that a contest must take place within 90 days of a vacancy occurring. This sounds fairly straightforward, but a series of unusual events have conspired to make the situation rather more complicated.

Vice President Scott is constitutionally prohibited from the Zambian Presidency, as his parents were born outside the state. The waters are muddied further by the fact that before Sata’s final trip to London, he decreed that Defence Minister Edgar Lungu would take charge in his absence.

In the last 48 hours, confusion has given way to farce and violence. Having initially removed Lungu as Secretary General of the ruling Patriotic Front Party, Scott quickly moved to rescind his decision in the face of public protests and riots in Lusaka, Zambia’s capital. Protestors complained that Scott’s actions were illegal, and disrespectful in their occurrence during the nation’s period of mourning.

The politics are intriguing. Scott has reportedly ruled himself out of contention for the Presidency, which he is currently forbidden from seeking in any case. Nevertheless, there have been suggestions that Scott may seek his party’s nomination, a move which may not prove popular with many Zambians.

In the days ahead, it may be tempting for the media and other observers to categorise this public antipathy towards Scott in racial terms, but actually it has much more to do with his perceived lack of competence than the colour of his skin. Scott’s parents were themselves anti-colonial activists and his father ran a number of pro-independence newspapers in Zambia.

Scott’s shaky performance since Sata’s death is fairly true to form, and follows on from a rather patchy performance as Vice President. At one point, he described South Africans as “backward” and gained a domestic reputation for political eccentricity.

So what’s next for Zambia?

The country is overwhelmingly young (70 per cent of voters are under forty), mostly peaceful, and has made limited economic and social progress. It is possible that the country’s immediate political future will be contested by the old guard on the one side, and a new generation of post-liberation leaders on the other.

It was interesting to note the symbolism of Sata’s body – which returned to Zambia on the first of November – being met by Kenneth Kaunda, his former rival and President of Zambia from 1964-1991. If Kaunda - now in his nineties - is a symbol of the past, it is unlikely that Zambians will look to Guy Scott, himself a septuagenarian, as a vision of the future.

Even those who might claim greater affinity with Zambia’s overwhelmingly young electorate are bound up in the post-colonial politics of the last fifty years. Already, Michael Sata’s son, Mulenga, currently mayor of the capital Lusaka, is giving firm indications that he may be interested in picking up where his father left off.

The first of these resulted in a co-edited book due out in 2014 with Routledge, called Critical Perspectives on African Politics: Liberal Interventions, State Building and Civil Society. He is also writing a book for Lexington due in 2015 on development and democracy in post-Cold War Malawi. The field-research for this book was enabled through a British Academy Small Research Grant, awarded in 2012.

The image accompanying this article is reproduced, with thanks, under creative commons licensing: