Koen Slootmaeckers, PhD candidate at Queen Mary University of London, writes about Sunday's LGBT Pride parade in Belgrade, and explores the implications for Serbian politics and the county's path to the EU. 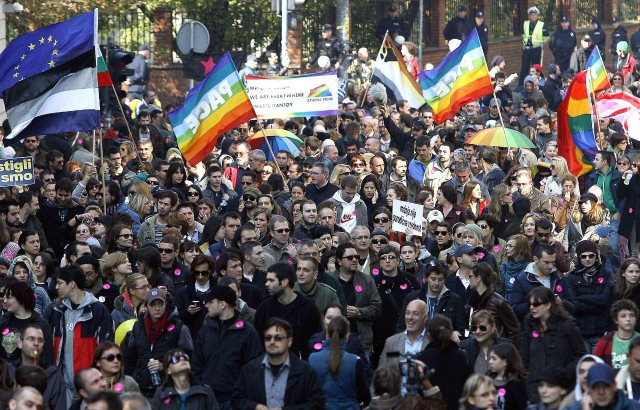 While the 2010 Belgrade LGBT Pride parade was marred by riots, violence and vandalism, the 2014 event occurred without major incident. Having been banned for three consecutive years for security reasons, it seems that Belgrade has been able to replace the previously violent images of Pride with a more peaceful picture. Thousands of LGBT people and their allies – protected by 7000 riot police – marched peacefully through the centre of the city.

While this sharp contrast, coupled with the attendance of senior political figures – including Ministers and the Mayor of Belgrade – might suggest that Pride organisers have become victors over a reluctant state, it is more likely that ‘success’ of the event was a result of a powerful and complex set of political dynamics.

In fact, Pride is a fascinating microcosm of how the Serbian government uses extreme political calculation to balance the concerns of a conservative domestic political system with the progressive expectations of the EU, a club in which Serbia desperately wishes to participate.

Throughout its history, the Belgrade Pride parade has been dependent on the sensitive calculations of the political elite to balance Serbia’s EU ambitions with domestic political realities.

After two failed attempts at a parade - in 2001 and 2004 - Serbian LGBT activists were in 2009 encouraged to try again; following the adoption by Serbia of EU-required anti-discrimination laws. However, after threats of violence by extreme right-wing groups, the authorities decided that Pride could not safely be held in the centre of Belgrade, and would have to be moved to the periphery of the city.

Activists interpreted this decision as a de facto ban, and a capitulation to the extreme right. The event was consequently cancelled. When the government’s stance was criticised by the EU, Serbian authorities began to pay attention; recognising that a successful Pride could serve as a small but important demonstration of the country’s intent to accede.

In 2010, the Serbian government used conflicting domestic and European pressures to its advantage. Domestically, pressure from the EU meant that the government was able to externalise responsibility for Pride, which allowed for an absolution of blame in the eyes of a conservative electorate. Conversely the government could claim credit internationally for the event, which was quickly labelled as the first successful Pride in Serbia, despite the accompanying violence.

In the years that followed, the political costs of Pride were seen to outweigh the benefits. Conflict at the Kosovar border in 2011 and national elections, led the government to ban the event. This political calculation was made easier by the EU, which was less vocal about facilitation of the LGBT rights as a trade-off for progress in other areas, particularly the normalisation of Serbia-Kosovo relations.

Similar political calculations defined 2012 and 2013. The EU responses to successive bans were mild, and within the enlargement process Serbia was commended for progress in other areas, notably the Brussels agreement between Belgrade and Pristina (April 2013), which led to the opening of accession negotiations with Serbia (January 2014).

So, why did the Serbian government allow and support Pride this year?

The 2014 Belgrade Pride is not evidence of a change of heart at policy level. The domestic and international environment has again conspired to force the parade upon a reluctant government.

At European level, the Commission explicitly condemned Serbia’s lack of political will to enable Belgrade Pride in its 2013 progress report.  Additionally, in the 2013-2014 enlargement strategy paper, the EU identified, for the first time, LGBT rights and the Pride parade as priority indicators in the assessment of fundamental rights in candidate countries. With these two documents, European pressure on Serbia to make Pride happen increased substantially.

Domestically, the political situation also changed. With a landslide victory in May 2014 elections, Prime Minister Vučić found himself unburdened by immediate electoral considerations. Furthermore, the three previous bans – officially justified on the basis of security risks – raised uncomfortable questions about law and order, which required answering in terms of the domestic political environment. Put simply, it suited the government to demonstrate that it was capable of protecting its citizens, and Vučić thus framed Sunday’s Pride parade as a security issue.

Days before the event took place he said, ‘I respect the constitutional obligations of the state and it is my obligation to guarantee safety and security to all citizens.’ Rather than externalizing responsibility of Pride – as was the case in 2010 - Vučić made sure a successful pride would be regarded as his victory, a showcase of his ability to ensure the security of Serbia; a country whose people place great stock in the rule of law. At the same time, however, Vučić made it clear – most likely to reduce any political damage amongst conservatives – that he did not necessarily support the event or those who participated.

Thus, domestic and international pressures conspired with canny political calculation. The result: a secure, non-violent Pride. Apart from some minor disturbances, the streets of Belgrade remained peaceful. Even the protest walk after the Pride passed off without physical violence, although there was homophobic and nationalistic chanting.

The almost total lack of violence is quite surprising. It again raises questions about the link between the Serbian state and the so-called hooligans, which have traditionally been used by the state as an informal security apparatus.

The relative peace is especially unusual when we consider that Dveri, a right-wing organisation, warned the government in May that Pride might lead to war on the streets of Serbia, and yet their protests last weekend remained peaceful. 1389, another right wing organisation associated with previous anti-gay violence, even explicitly called upon protesters to refrain from violence.

Perhaps the authorities were able to ‘convince’ these right-wing, patriotic groups that any form of violence would not be beneficial to Serbia or the groups themselves. (For more on this see the recent blog by Rory Archer).

In sum, rather than saying Pride Parade was allowed, it is more accurate to say it was tolerated by a pragmatic government (and by the hooligans to a certain extent). While this makes the political victory of the Pride organisers over the State and their aggressors rather minimal, the symbolic victory is enormous. In the years to come it will become hard for the Serbian state to use ‘security risks’ again as a reason to ban Pride. The precedent created by this year’s Pride and continued scrutiny of the EU during the accession negotiations have de facto taken away Serbia’s only legal argument to ban Pride Parades.

Koen Slootmaeckers is a PhD candidate at the School of Politics and International Relations, Queen Mary University of London. His doctoral research focuses on the impact of EU Accession processes on the LGBT movement in the Western Balkans. Koen is also a research affiliate at Leuven International and European Studies (LINES) at the University of Leuven (Belgium), where he currently works on an edited volume entitled: The EU Enlargement and Gay Politics: The Impact of Eastern Enlargement on Rights, Activism and Prejudice (Palgrave, 2015). He tweets @kslootmaeckers.