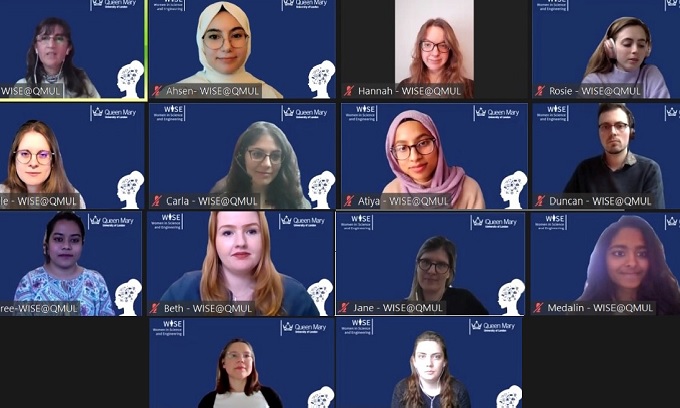 In line with this year's International Women's Day #ChooseToChallenge theme, the event focused on ‘Ethnic Minority Women in STEMM’, and ‘Future Directions and Priorities for Women in STEMM’. The conference provided a unique opportunity to challenge existing gender and ethnic disparities in STEMM, whilst celebrating role models in the field of science and engineering.

The event, which was attended by over 137 delegates from Queen Mary and the wider worldwide STEMM community, included four keynote speeches and a panel discussion where inspiring speakers shared their experiences with attendees. Keynote speakers included Professor Nirmala Rao OBE, Vice Chancellor of the Asian University for Women who spoke about ‘Future Directions for Women in STEMM’ and Zeb Farooq MBE who discussed ‘What it Means to be a Male Ally’. Queen Mary’s Vice Principal for People, Culture and Inclusion, Sheila Gupta MBE, also shared the University’s progress and future plans to promote inclusivity in STEMM.

Interactive workshops on creating greater self-awareness and networking skills for career development were held on both days during the conference, providing attendees with ideas and tools for their own personal development.

Following the success of the event the WISE@QMUL team hope to plan further smaller events over the coming year.

Atiya Sarmin, Conference Chair of WISE@QMUL, said: “We’re really proud of the great feedback we’ve received from conference attendees and it’s great to know that our efforts have had a positive impact on those who attended. I’d like to thank all the committee for their work on the event. This conference was an entire team effort, with the committee arranging everything from the programme, publicity, and production of the event. We’ve learnt a lot during this experience, especially around putting on virtual events, but are excited to start planning more, smaller scale events over the coming year.”

Dr Sharan Sidhu, the Staff Advisor of WISE@QMUL and part of the Conference Programme Committee, added her thanks to the committee: "I'd like to thank the committee for working so hard to produce such a fantastic event. It was a joy to work with such a dedicated, cohesive and supportive team- I’m really proud of them.”

WISE@QMUL was originally set up in 2009 as an informal student group for discussion of female participation in STEM (Science, Technology, Engineering and Mathematics). This year, they replaced the acronym STEM with STEMM, aligning their goals with the Athena SWAN Charter, which encompasses Science, Technology, Engineering, Mathematics and Medicine.

The group aims to establish links with women working within STEMM sectors that that can act as role models, discuss a range of career paths, and provide encouragement to female students and early career researchers at Queen Mary.