Students at Barts and The London School of Medicine and Dentistry, Queen Mary University of London, have been virtually transported into a surgical ward to follow their lecturer on his ward rounds. 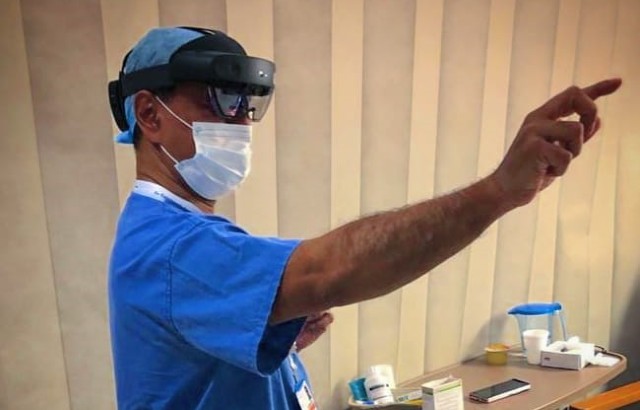 The third year medical students sat in the Perrin Lecture Theatre at Queen Mary’s Whitechapel campus to watch a first-person live stream of Professor Shafi Ahmed’s surgery rounds at The Royal London Hospital, which was delivered via a camera on ‘smartglasses’ he was wearing.

“The pandemic has forced us to think differently about medical education,” said Professor Ahmed, Lecturer in Surgery at Queen Mary University of London and Consultant General, Laparoscopic and Colorectal Surgeon at Barts Health NHS Trust. “Sadly, our students haven’t been able to spend time on the wards so we are developing novel ways of recreating the experience of seeing patients face to face.”

‘It felt as if I was in the same room’

Microsoft HoloLens smartglasses contain small screens in the lenses which overlay images in the wearer’s field of vision, and cameras which relay their point of view. 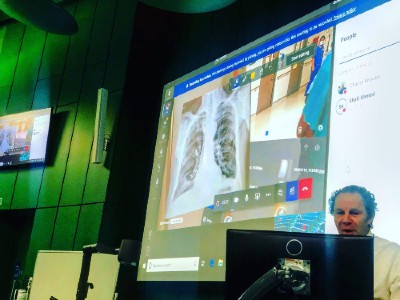 The live feed is displayed on the projector in the lecture theatre, complete with the patient's x-ray images

While wearing the HoloLens, Professor Ahmed visited two patients on the ward who were recovering from major surgery. The students in the lecture theatre saw him take the patients’ history and examine them. He was also able to overlay their X-rays and CT scans on the live video feed and draw on the images to highlight certain points of interest.

“Watching the interaction with the patient from my perspective using mixed reality has not been been offered at the medical school before,” added Professor Ahmed. “It also seemed a fairer way to allow all the students to get the same view and experience. Normally you have a crowd of students looking onto a computer screen in the ward, not being able to see everything. I could also see the lecture theatre audience within the HoloLens and it felt as if I was in the same room.” 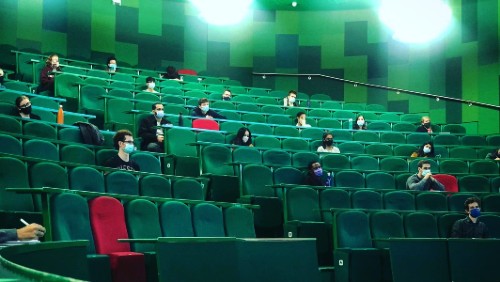 Third year medical student Conor Taylor who attended the lecture said: “This was a fantastic learning experience enhanced by the high fidelity of live streaming interaction with real consenting patients. This is clearly going to be a staple of medical education in years to come, with the need exacerbated, but also probably accelerated, by the recent pandemic. Often it takes an individual, like Dr Ahmed, to see the potential of a recent development and to champion it, in order for it to become much more widely accepted. ‘Medtech’ is undoubtedly an exciting field and being at Barts has enabled us to be on the receiving end of cutting-edge technology.”

Professor Ahmed added: “My work over the last six years at Queen Mary using Google Glass, virtual reality, holograms, avatars and mixed reality has shown that immersive and exponential technologies represent a paradigm shift in how we deliver effective medical education. Our patients have been very accommodating to share their experiences with the students and the support from Queen Mary and Barts Health is so important when trying to innovate.”