On Dinosaur Day, Friday 15 May, we're delving deeper into new research led by Queen Mary, which has reopened the debate on whether we can identify male and female dinosaur fossils. 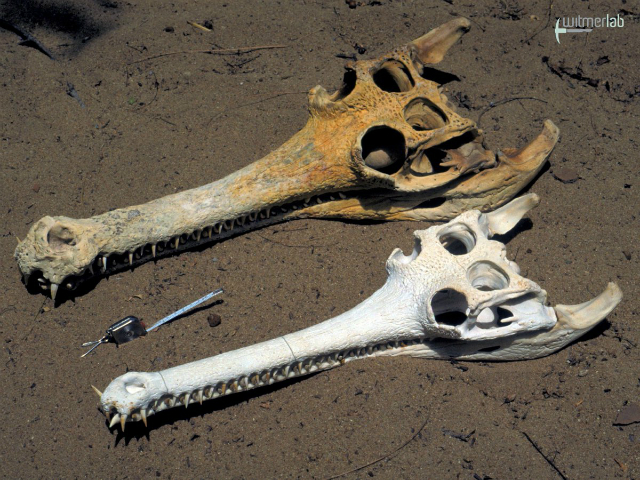 The new study, published in the journal PeerJ, suggests that despite previous claims of success it’s very difficult to spot differences between the sexes.

Researchers analysed skulls from modern-day gharials, an endangered and giant crocodilian species, to see how easy it is to distinguish between males and females using only fossil records.

Male gharials are larger in size than females and possess a fleshy growth on the end of their snout, known as a ghara. Whilst the ghara is made from soft tissue, it is supported by a bony hollow near the nostrils, known as the narial fossa, which can be identified in their skulls.

The research team, which included scientists from the Canadian Museum of Nature, Georgia Southern University and Ohio University, studied 106 gharial specimens in museums across the world. They found that aside from the presence of the narial fossa in males, it was still very hard to tell the sexes apart.

Dr David Hone, Senior Lecturer in Zoology at Queen Mary University of London and author of the study, said: “Like dinosaurs, gharials are large, slow growing reptiles that lay eggs, which makes them a good model for studying extinct dinosaur species. Our research shows that even with prior knowledge of the sex of the specimen, it can still be difficult to tell male and female gharials apart. With most dinosaurs we don’t have anywhere near that size of the dataset used for this study, and we don’t know the sex of the animals, so we’d expect this task to be much harder.”

Spotting differences between the sexes

In many species, males and females can look very different from each other. For example, antlers are largely only found in male deer and in peacocks, males are normally brightly-coloured with large, iridescent tail feathers whereas females are much more subdued in their colouration. This is known as sexual dimorphism and is very common within the animal kingdom. It is expected that dinosaurs also exhibit these differences, however this research suggests that in most cases this is far too difficult to tell from the skeleton alone.

Dr Hone said: “Some animals show extraordinarily high levels of sexual dimorphism, for example huge size differences between males and females. Gharials sit somewhere in the middle as they do possess these large narial fossa that can help with identification.  Our study suggests that unless the differences between the dinosaurs are really striking, or there is a clear feature like the fossa, we will struggle to tell a male and female dinosaur apart using our existing dinosaur skeletons.”

The new research also challenges previous studies that have hinted at differences between the sexes in popular dinosaur species such as the Tyrannosaurus rex (T.rex), and led to common misconceptions amongst the general public.

“Many years ago, a scientific paper suggested that female T. rex are bigger than males. However, this was based on records from 25 broken specimens and our results show this level of data just isn’t good enough to be able to make this conclusion,” Dr Hone added.