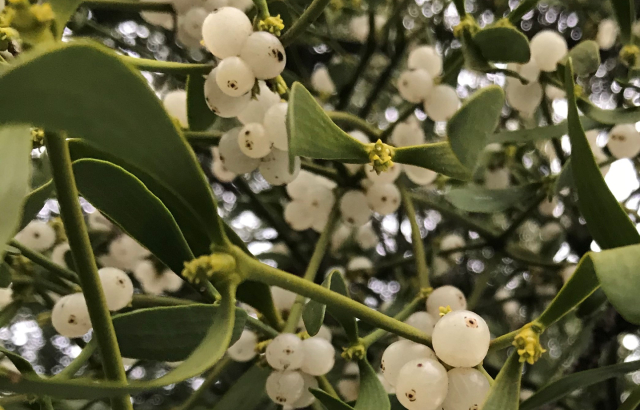 Nuclear genome size, which is the total length of DNA molecules within the cell’s nucleus, can vary greatly between different plant species. Whilst it might be thought that larger or more complex plants would have more genes and therefore bigger genomes, this is not the case. For example, the oak tree genome is surprisingly over a 100 times smaller than the genome of the famous festive plant, mistletoe.

It has been suggested that the size of a plant’s genome is dependent on the balance between the accumulation and removal of repetitive DNA, repeated sequences that have the ability to move around and multiply within the genome.

In the recent study, published in Nature Plants, the researchers confirm this hypothesis, showing that plant species with larger genomes are less efficient at removing this repetitive DNA from their genomes. Instead these repeats become ‘fossilised’ in the genome, where they acquire mutations and begin to degrade. The degraded DNA sequences, known as ‘dark matter’, are then no longer recognized by the removal systems within the plant, and persist in the genome, which then continues to grow in size.

Professor Andrew Leitch, Professor of Plant Genetics at Queen Mary, said: “Genome sizes of flowering plants vary greatly, with observed differences of around 2,400-fold between species, and some can reach giant sizes. For example, if we were to unravel the DNA from one cell of the largest known plant genome, P. japonica, it would be stretch a staggering 100m, the height of Big Ben’s bell tower. In contrast the human genome would only stretch to about 2m.”

“The parts of the genome comprising genes and other sequences important for regulation only account for a small fraction of the total genome, perhaps representing only around 0.5 per cent of DNA in species with large genomes. In these species, there is a huge accumulation of the degraded products of repeat sequences, or ‘dark matter’, comprising vast tracks of non-repetitive, non-genic DNA.”

Larger genome sizes can also affect plant growth and species with giant genomes are frequently found among critically endangered plants. Professor Leitch added: "Previous studies have shown that plants with larger genomes are at greater risk of extinction, potentially because they are less able to adapt to changing environments. Indeed the accumulation of repeats and ‘dark matter’ in the genome has ecological consequences, shaping the distribution and persistence of biodiversity.”