The bench, intended as a lasting memorial and tribute to Catherine, has been installed on Queen Mary’s Mile End campus, in the atrium on the First Floor of the ArtsOne building. It was paid for by students, recent graduates and friends of the School of English and Drama through an online crowdfunding campaign.

Billy Bray (Drama), Leda Maiello (English) and Gwyn Lawrence (Drama graduate and MA student in School of Business and Management) set up the project, organising and carrying out the practical work of having the initiative approved. They then set about fundraising before finally ordering and installing the bench which is engraved with a tribute to Catherine. The plaque includes a quote by Catherine, chosen by the students, from her essay on the posthumous legacy of Derek Jarman. 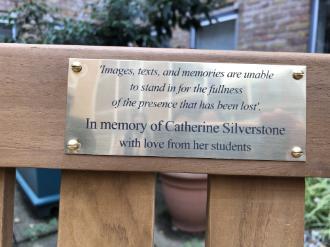 Professor Dominic Johnson, Head of Drama at Queen Mary said: “My colleagues in the School of English and Drama are so grateful to the students who initiated this idea – Billy, Leda and Gwyn – and the many more students who supported it. We are so moved by this gesture of remembrance by our wonderful students in English and Drama – for whom Catherine cared so thoroughly. She would have been so proud.”

Professor Matthew Hilton, Vice-Principal for Humanities and Social Sciences at Queen Mary said: “Catherine was a much loved and admired colleague not only in the English and Drama departments but across the wider University. I am sure that, like me, many of you will be moved by this really wonderful tribute from her students. It is a testament to how much she was loved and appreciated.”

In addition to the students who led the initiative, the following students in SED helped with advertising and fundraising: Niall Loftus, Naz Simsek, Elliot Douglas, Sofia Renzi, Anca-Teodora Stoian.

Catherine joined Queen Mary in 2007 and was an esteemed scholar of contemporary queer and decolonial approaches to Shakespeare, and of trauma and performance. She also published on LGBT culture more broadly, including in relation to club performance, performances of queer affirmation, queer afterlives, and the films of Derek Jarman. In addition to her commitments at Queen Mary, Catherine was the editor of Titus Andronicus for the Norton Shakespeare.

Following her death on 4 October 2020 at King’s College Hospital, Catherine’s colleagues in the School of English and Drama set up a remembrance page for people to leave their tributes to her. Details about a wider memorial and fitting tribute to honour Catherine’s contribution to Queen Mary will be announced in due course.