Dr Holly Ryan, Lecturer in International Political Sociology with the School of Politics and International Relations has written an opinion piece for The Conversation about the concept of twinning towns and cities. 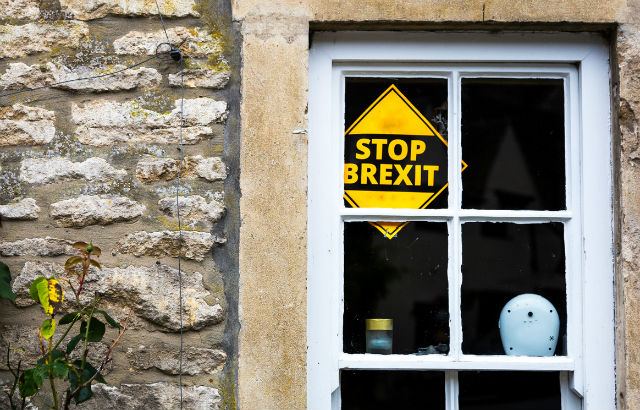 A stop Brexit sign in the window of a village house

The practice of twinning towns and other communities has often been viewed as a cultural or leisure-based activity. Now though, Brexit has drawn the political side of twinning into sharper public focus. Some people are pressing to erase their towns’ longstanding relationships with European partners. Others have doubled down on their international commitments, trying to show that their community remains open and inclusive.

Oxford City Council marked the 31 January Brexit date by raising the flags of its European twin towns and launching a new campaign to facilitate community cohesion in the wake of the UK’s exit from the EU.

The tussle over Brexit reveals the ways that twinning functions as a site of everyday politics, in this instance a struggle between nationalist and regionalist identities. But we shouldn’t be surprised that twinning has become the focus of such debates. My ongoing research shows that twinning is a practice that has always been rooted in politics.

Twinned towns participate in a community that extends beyond national borders while retaining local identity. The twinning process and organisations provide an alternative way to engage with politics, and offer opportunities for learning, connecting, organising and caring.

The first case of twinning in Europe is thought to be the link established in 1920 between Keighley, West Yorkshire, and Poix du Nord in northern France. The French village suffered a great deal of damage during the First World War and residents of Keighley made donations to help fund a new community centre.

Twinning blossomed after World War II, as national governments in Europe sought to promote peace and goodwill among towns torn apart by recent conflict. These post-war links were experiments in cultural diplomacy, aimed at building peace between beleaguered, fragile and divided national communities.

A range of agendas

UK twinning practice has further transformed since the late 1970s. It is no longer just towns or cities that twin with each other but trade unions, cooperatives, schools, hospitals, and other public services or technical bodies. Twinning is now not just a reflection of the “high” politics of peace and diplomacy, but has become more democratic and open to a range of different agendas. This has occurred as local and municipal governments, community and grassroots campaigns have all weighed in and taken initiative.

Civil society groups have used the practice of twinning to contest or challenge the actions and policy positions of domestic and foreign governments. My ongoing research has shown that during the early 1990s, temporary links were established between Scottish towns and African National Congress regions in South Africa, with the aim of supporting black communities in the transition away from apartheid. Glasgow, for instance, linked with Transkei as the latter was incorporated into the Eastern Cape province of the new South Africa. The legacy of this is still felt today through partnerships between the Nelson Mandela and Glasgow Caledonian universities.

Twinning also took place between communities in the UK and Nicaragua against the backdrop of the latter’s Contra War in the 1980s. These “solidarity twinnings” played an important role in mobilising opposition to foreign-backed intervention in Nicaragua as well as calling attention to the harsh realities of day-to-day life in a conflict setting. Similar examples today would include efforts to link with communities in the Palestinian Occupied Territories, such as the recent twinning between Oxford and Ramallah.

In all cases, one thing came across strongly in my research interviews: close contact with a community overseas tends to shift worldviews and shape lifestyle choices. It also produces deep and lasting friendships.

In recent years, the UK has seen a huge tightening of border controls. It has become much harder for those travelling from countries outside of Europe to acquire visas. These travel restrictions have made it difficult for equal exchange to take place between linked communities such as Marlborough in the UK and Gunjur in the Gambia. For many years these towns ran a programme of reciprocal visits enabling engineers, teachers and students to carry out placements where they could gain new skills.

Much of the assistance provided by local government to formally twinned towns, such as help with administration, access to meeting rooms or photocopying, has dried up as a result of austerity and cuts. This means the twinning associations – which are largely led by volunteers – have had to take on more of the costs and labour involved.

While Brexit has highlighted opposing views on twinning, the truth is that some councils, responding to austerity and Euroscepticism, have effectively been silently “untwinning” for years. My ongoing research suggests that sometimes they do this without even telling the partner community – they just remove resources, staff and thereby any institutional memory of the link.

Twinning has evolved over time to respond to communities’ concerns. It remains to be seen how exactly it will develop in response to the challenges of dwindling resources and rising Euroscepticism. Whatever happens, one thing is for certain: twinning will continue to reflect the creativity, conflicts and commitments of civil society. In other words, it will continue to be political.

This opinion piece was originally published in The Conversation on 6 March 2020.