Gawain Towler served as Director of Communications for the Brexit Party and was previously Head of Press for UKIP. In a special In Conversation event co-hosted by Queen Mary University of London’s Mile End Institute and The UK in a Changing Europe, he reflected on a 16-year political journey towards Brexit. 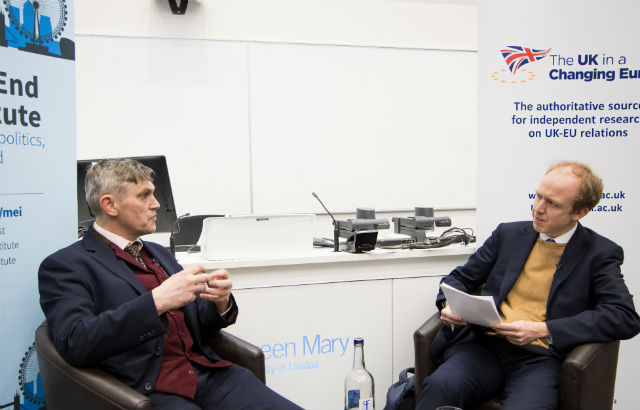 The result of the 2016 Brexit referendum and subsequent political developments have been unprecedented in recent UK political history. The challenges to the political system in the UK have given rise to wider discussions around the UK’s place in the world as well as its future relationship with the European Union.

Gawain Towler reflected on the early days of working with Nigel Farage and UKIP stating that it was initially difficult to break through to the public through the media. “Nobody [media and journalists] would turn up when we hosted events. The BBC local stations had to because we had a certain percentage of the vote but in general the media did not care,” he said.

The breakthrough came when Farage started to embark on a bolder media strategy, being “ruder” and in the words of Towler, more “off-colour in comments”. Towler also highlighted that the UK’s relationship with the EU was problematic from the start, the “half in, half out” situation, which included certain exemptions for the UK, “wasn’t good for anyone” in his view.

Gawain Towler attributes much of the focus on funding for schools and hospitals under the last Labour government to the UK’s membership of the EU. “We couldn’t control certain areas, they were the few areas we could control.”

In Towler’s view, without Nigel Farage there would have been no Brexit. “Without him, we would not be where we are […] he knew the importance of media. The issue of personality also arose during the discussion. In Towler’s view Farage was relatable in a way that most politicians at the time were not. “He [Farage] never pretended to be perfect, more moral or wiser than anyone else.”

The key moment in the UK’s Brexit journey came in 2010 when, according to Towler, the Daily Express changed editorial stance to support the UK leaving the EU.

When asked if he had any regrets about the campaign for the UK to leave the EU, Towler stated that the figure of £350 million for the NHS was signed off by Boris Johnson and that this is not something he would have gone with as a message.

Towler was also asked if he had any retrospective advice for the Remain campaign. “Get a sense of humour,” he said. “They should have had a positive campaign, making the case for the UK remaining in the EU. Instead they were miserable, it was project fear.”

When the floor was opened to questions from the audience, Towler was asked about his experiences of working with Dominic Cummings to which he stated that his contact had been limited to email only. Despite all the political debates, Towler also maintained that he retained friendships with colleagues in Brussels and that he “does not wish them [the EU] ill.”