A breast cancer test has been found that helps doctors make treatment decisions for some breast cancer patients, following research carried out at Queen Mary University of London and funded by Cancer Research UK. 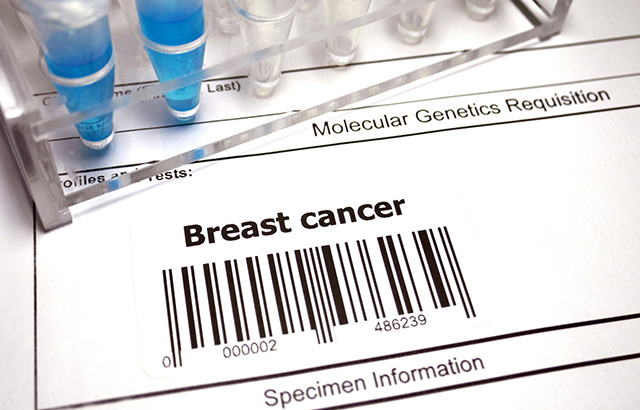 The test was successful in predicting whether chemotherapy would be beneficial for patients with the most common type of breast cancer (oestrogen-receptor positive, HER2-negative), thereby helping to direct patients with a high-risk of metastasis to chemotherapy, while allowing lower-risk patients to opt out of the treatment and its potential side effects.

Approximately 85 per cent of breast cancer patients are now diagnosed as oestrogen receptor positive, which means that the cancer grows in response to the hormone oestrogen. Doctors treating the majority of these women increasingly use multigene tests to determine each patient’s prognosis and risk of metastasis, and advise on the best suitable treatment.

The new study, published in the journal Breast Cancer Research and Treatment and carried out in the UK, Austria and Spain, has found that a multigene test called EndoPredict (Myriad Genetics) is able to predict whether chemotherapy will work for an individual patient.

Researchers at Queen Mary University of London, the Austrian Breast and Colorectal Group and the Spanish Foundation Research Group in Breast Cancer performed a combined analysis of three large clinical trials, including a total of 3,746 women, who received treatments including hormone therapy and chemotherapy.

A test that predicts the success of chemotherapy

The study results showed that patients with a high EndoPredict test result – indicating a high risk of metastasis – who received chemotherapy in addition to hormonal therapy had statistically better 10-year outcomes than those who only received hormonal therapy.

The study was therefore able to show that EndoPredict is not only a prognostic test, but for the first time was able to demonstrate that EndoPredict also has predictive abilities with regards to chemotherapy.

Traditionally clinical features such as tumour size, grade and nodal involvement are used to determine prognosis and treatment.  In cases where it is unclear from these clinical features whether a woman is at high enough risk to receive chemotherapy, the EndoPredict test can give additional prognostic and indirectly predictive value in terms of chemotherapy benefit.

Multiple guidelines, as well as the National Institute for Health and Care Excellence (NICE) regulations, recommend multigene tests to be used by oncologists around the world to aid in their decision-making process about treatment for women with the most common type of breast cancer - oestrogen-receptor positive, HER2-negative.

With the added predictive benefit of EndoPredict demonstrated by this study, use of this test might become more commonly used to determine whether chemotherapy will effectively treat a patient, bringing enormous benefit to women diagnosed with breast cancer.

Lead author Dr Ivana Sestak of the Wolfson Institute of Preventive Medicine which is part of Queen Mary University of London’s Centre for Cancer Prevention, commented: “Our new results give clinicians good quality data to inform specific treatment recommendations for women. Our data shows that using the EndoPredict test to assess the risk of metastasis can spare women unnecessary chemotherapy if the test results show that a woman is at low risk of recurrence by the test.”

Professor Miguel Martin is the Chairman of GEICAM, the leading academic group in clinical epidemiological and translational breast cancer research in Spain.  He commented:  “The Spanish group GEICAM is very proud of having contributed to this analysis that can help clinicians select the best adjuvant therapy for their breast cancer patients. In the era of personalized medicine, avoiding chemotherapy when it is of little or no value is a need for the patients”.

Dr Sestak added:  “It is clinically important to determine which women with hormone receptor positive, HER2-negative breast cancer need chemotherapy in addition to standard 5-years of hormonal treatment. We have shown that EndoPredict has the ability to predict chemotherapy benefit, which will ultimately help clinicians in their decision-making process about adjuvant treatment.”

Progress made in genetic testing

Professor Daniel Rea, Cancer Research UK's breast cancer expert, said: "This important study is one of the few to provide not just information on the risk of a patient's breast cancer coming back, but also whether their cancer is likely to be sensitive to chemotherapy. The Endopredict test has the potential to help some women diagnosed with early hormone receptor positive, HER-2 negative breast cancer, avoid needless chemotherapy, and may reassure those where it’s needed.

"This research highlights the progress being made in genetic testing and could be a valuable addition to the current tests available to doctors, helping them advise patients on the best treatment. Trials in the UK are ongoing to provide more evidence to help us make the best use of these tests.”

This study was funded by Cancer Research UK and Myriad Genetics.