The most severe pandemic in recent history, killing some 50 million people worldwide, the Spanish Influenza, may have emerged up to two years earlier than previously believed, according to a new study by Queen Mary University of London researchers. 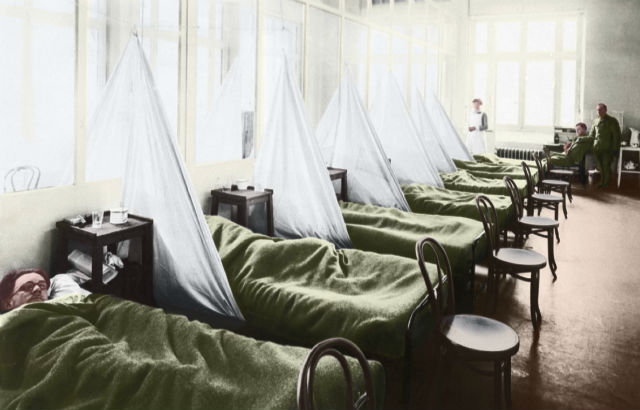 The study also found that the Spanish Influenza’s early manifestation was ignored at the time as a “minor infection”. It is believed that, if doctors had recognized that influenza was the cause of an illness which was killing soldiers in Etaples, France, and Aldershot, England, in 1916, scientists could have then created a vaccination programme and some of the worst effects of the Spanish Influenza could have been avoided.

Published in the journal Human Vaccines & Immunotherapeutics, the study uses modern day scientific technology and literature published in The Lancet from the time, to not only track the origins of the virus, but to seek how we can learn from the past to prevent the spread of an influenza pandemic.

Professor John Oxford, a virologist from Queen Mary’s Blizard Institute said: “We have identified long-neglected outbreaks of infection: outbreaks which, judged as minor at the time, can now be seen as increasingly important, and a portent of the disaster to come.

“The research undertaken in the production of the Etaples paper was particularly exhaustive in its scope and depth. Not only were the usual examinations undertaken, of tissue and sputum, but a postmortem examination was conducted of every single soldier dying of disease, throughout a period of seven weeks in early 1917.”

Professor Oxford and Douglas Gill, a military historian, traced the origins of the Spanish Influenza as it emerged in 1915 and 1916 in the Etaples Administrative District in northern France.  At the time, up to 30,000 soldiers were admitted each year to British army hospitals in France and England, suffering from typical influenza symptoms.  In early 1917, however, a medical group in Etaples treated hundreds of patients infected with what they described as an “unusually fatal disease” presenting “complex” respiratory symptoms.

In Aldershot, in the south of England, three senior physicians were also tackling a problem whose hallmarks looked very much the same. In both instances, the disease was characterised by a rapid progression from quite minor symptoms to death.

Both medical groups were encountering a case fatality in the order of 50 per cent, and they were learning from colleagues in England and France that the malady was occurring elsewhere.

It is this information which has helped Professor Oxford and Gill to track what was then believed to be a minor respiratory infection as the very origins of the biggest killing pandemic of the 20th century.

The findings are further supported in modern papers analysed by Professor Oxford and Gill which point to all eight genes of the H1N1 family of influenza A viruses as emerging in 1915-1916.

These modern studies have also shown that the ‘emerging virus’ began with aquatic geese, ducks, and swans as a reservoir.  It is likely that this disease was then passed on to the soldiers through the faeces of migrating water birds.

Professor Oxford explains: “In essence, the virus must have mutated.  It lost a great deal of its virulence, but gained a marked ability to spread.  Recent experiments with a pre-pandemic ‘bird flu’ called H5N1, deliberately mutated in the laboratory, have shown that as few as five mutations could have permitted this change to take place.

“We appreciate today that a unique characteristic of a pre-pandemic virus lies in its inability to spread from person to person. The teams at Etaples and Aldershot, although strong in clinical diagnosis, were misled by the lack of spread of this infection.  Accordingly, they failed to pinpoint influenza as the underlying cause.

“Once the virus is able to spread from human to human, disaster strikes. With a generation time of two to three days, from just three patients who were infected originally, a million infections can be caused in around 40 days. And this is probably exactly what happened in 1918-1919.”

A silver lining to a very dark cloud

Today, the World Health Organization is on full alert; and every nation in the world has been asked to plan for a pandemic of bird influenza A (H5N1) or (H7N9).

By understanding the origins of The Spanish Influenza through analysing modern day research and papers written in 1917, it is hoped this study could help prevent a new influenza pandemic.

Professor Oxford added: “Something similar to what happened at the beginning of the twentieth century could easily be repeated.  As a precaution, governments everywhere are stockpiling vaccines against the pneumococcus that usually develops as a secondary infection after the flu, and which causes fatalities on a very large scale.”