Queen Mary Barts and the London medical student Maria Ahmad and her three teammates from around the world have won the Elsevier ClinicalKey Global Challenge. 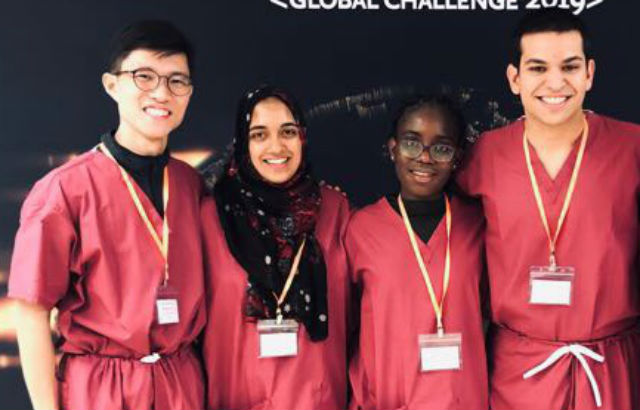 Maria reached the final –which saw 12 medical students from as many countries gather in London – after getting through four rounds of online questions and  submitting a video outlining her thoughts on medical leadership.

Earlier this month she led two of the three medical simulations that her team and their competitors completed in an ‘escape room’ at St George’s Hospital in south London. Her team was made up of three other medical students Aaron Goh from Singapore, Juan Pablo Scarano Pereira from Spain and Folakemi Olaokun from South Africa.

Working together to treat ‘a patient’

“We had a simulated patient and had to take a history, examine the patient and conduct observations, working together to come to a diagnosis and management plan for the patient,” she says.

Each mini-challenge didn’t end there, however – as Maria explains.

All this was watched by judges via video and from behind a one-way mirror.

The weekend kicked off with a social event at The Gherkin and the following day the 12 participants embarked on team-building exercises – including a treasure hunt around London.

Maria says: “While we were on our way to visit St Paul’s Cathedral, I suggested to my three teammates that we spend some time talking about our strengths and weaknesses and how we would complement each other within the team so that we were ready for the challenge the next day. We discussed team roles and decided that I and another teammate would lead the rest of the team through the simulations. However, we encouraged all members of the team to contribute to the discussions and decisions made.”

Students should look to next year

Maria is modestly keen to emphasise that her team’s success was the result of cooperation and joint effort and that all 12 finalists had triumphed by simply reaching the final.

She has no hesitation in urging other Queen Mary Barts and The London students to enter if Elsevier repeat the competition next year.

“It was such an incredible opportunity and I was so lucky to be part of it. There was a great sense of friendship amongst the 12 of us and it was amazing to be able to work together with some of the most talented medical students from across the globe.  The challenge also allowed me to reflect on the importance of teamwork and communication in medicine and develop strategies to make this more effective, which is something that I will take forwards into my future career.”