Professor Mark Caulfield, Professor of Clinical Pharmacology at Queen Mary University of London and the interim Chief Executive at Genomics England, has been awarded a knighthood in the Queen’s Birthday Honours List. 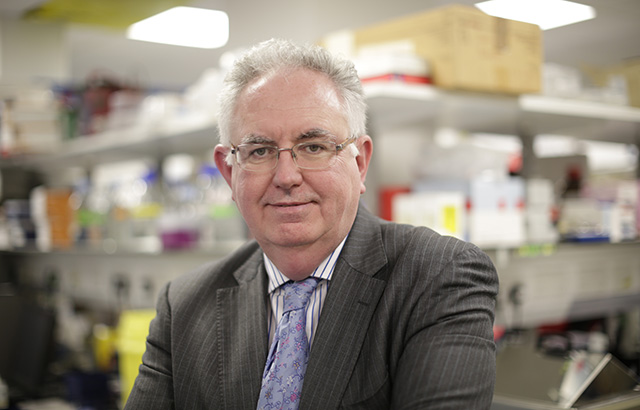 Since 2013 Professor Caulfield has been instrumental in delivering the world-leading 100,000 Genomes Project, which hit its target of sequencing 100,000 whole genomes in 2018 and has already delivered life-changing results for patients. This NHS transformation programme used whole genome sequencing to bring new diagnoses to people with rare diseases and to help choose cancer therapies.

To increase the value for participants in the project, Professor Caulfield established a coalition of 3,000 researchers worldwide and assisted the NHS in the creation of the National Genomic Test Directory.  This will offer equitable access for 55 million people, depending on clinical need, to the appropriate genomic tests via a new National Genomic Medicine Service.

Also receiving an honour from the Queen is Graham MacGregor, Professor of Cardiovascular Medicine at Queen Mary's Wolfson Institute of Preventive Medicine, who has been awarded Commander of the Order of the British Empire (CBE) for services to Cardiovascular Disease.

Professor MacGregor has been instrumental in setting up the Action on Salt group at Queen Mary, which has been successfully working with the food industry and Government to highlight the harmful effects of salt intake, and bring about their reduction in processed food.

Speaking about his knighthood, Professor Sir Mark Caulfield said: “I have been incredibly lucky to stand amongst and alongside giants from our NHS, Genomics England, our universities, the government, our funders and most importantly, our participants.  Together they helped me to transform genomics in healthcare.  Their commitment, generosity, and trust has made our nation the world leader in the application of genomic medicine in the NHS. I am deeply honoured and thank every one of those who made this possible.”

Professor Colin Bailey, President and Principal of Queen Mary University of London, said: “I am delighted that Mark’s outstanding work in genomics has been recognised with such a prestigious honour. His pioneering work will pave the way for new diagnoses and precision healthcare across the globe. He is truly one of our stars at Queen Mary, and it is wonderful to see his contribution to science and medicine recognised with this honour.”

Jonathan Symonds CBE, the chair of Genomics England said: “Mark’s knighthood is a fitting recognition of his pioneering and tireless work in genomics.  He is an extraordinary clinician scientist whose contribution and leadership are respected worldwide for delivering the 100,000 Genomes Project. His role as Chief Scientist of Genomics England has seen whole genome sequencing reveal new diagnoses, improve treatments, and fuel medical research. It has benefited and will benefit many, many people across the world. This award is richly deserved.”

Professor Caulfield graduated in Medicine from the London Hospital Medical College in 1984 and trained in Clinical Pharmacology at the Medical College of St Bartholomew’s Hospital and Queen Mary University of London, where he holds a Chair.

Top 1 per cent of researchers in the world

He has made substantial contributions to the discovery of genes related to cardiovascular health, cancer and rare diseases, including the discovery of more than 1,000 gene regions for blood pressure. He is amongst the top 1 per cent of the most highly cited researchers worldwide and his clinical pharmacology research has changed national and international guidance for high blood pressure.

Since 2000 he has been a Fellow of the Royal College of Physicians, and in 2002 he was appointed Director of the William Harvey Research Institute at Queen Mary University of London.

In 2008 he was elected a Fellow of the Academy of Medical Sciences, and became Director of the NIHR Barts Biomedical Research Centre.

Professor Caulfield was the academic lead for the creation of the Barts Heart Centre, bringing three hospitals together in 2015 to create the UK’s largest heart centre.

In 2013 he became an NIHR Senior Investigator and was appointed Chief Scientist for Genomics England where he has led the scientific strategy and delivery of the 100,000 Genomes Project, which sequenced the 100,000th genome on 5th December 2018. He became interim Chief Executive of Genomics England in January 2019.

The 100,000 Genomes Project was primarily funded by the National Institute for Health Research (which also helped to recruit participants and store biological samples).  Generous funding also came from the Wellcome Trust, the Medical Research Council, Cancer Research UK, the Department of Health and Social Care, NHS England, and the administrations of Scotland, Northern Ireland and Wales.

Commenting on his CBE, Graham MacGregor CBE, Professor of Cardiovascular Medicine at Queen Mary University of London and Chair of Action on Salt, said: “I am thrilled to have been awarded a CBE by the Queen’s birthday honours list for 2019 for services to Cardiovascular Disease and want to thank my team for their continuous support.

"In the early 2000’s, the UK pioneered a salt reduction programme led by the Food Standards Agency and Action on Salt with the setting of incremental salt targets, so that the food industry was slowly reducing the huge and unnecessary amounts of salt they add to food. This resulted in a fall in UK population salt intake, a fall in blood pressure and more than 9,000 lives have been saved per year from preventing strokes and heart disease.

"Eating too much salt puts up our blood pressure, the major cause of cardiovascular disease which is the leading cause of death and disability worldwide. This issue is recognised worldwide, with many countries adopting a salt reduction strategy similar to the UK. If we were able to achieve the World Health Organisation’s global target, then we would prevent more than 1.6 million cardiovascular disease related deaths per year, as well as major cost savings to individuals, their families and health services.

"This award is in recognition that our area of research is saving lives, and will continue to save lives for as long as the food industry and the government continue to support salt reduction.”