E-cigarettes are almost twice as effective as nicotine replacement treatments, such as patches and gum, at helping smokers to quit, according to a clinical trial led by Queen Mary University of London. 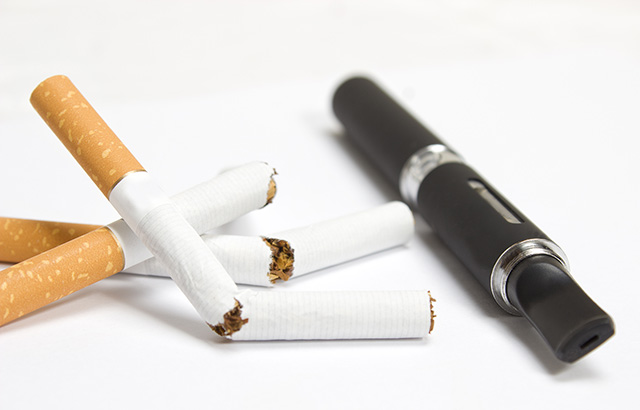 The multi-centre trial, which involved almost 900 smokers who also received additional behavioural support, found that 18.0 per cent of e-cigarette users were smoke-free after a year, compared to 9.9 per cent of participants who were using other nicotine replacement therapies.

Lead researcher Professor Peter Hajek, Director of the Health and Lifestyle Research Unit at Queen Mary's Wolfson Institute of Preventive Medicine, said: “This is the first trial to test the efficacy of modern e-cigarettes in helping smokers quit. E-cigarettes were almost twice as effective as the ’gold standard’ combination of nicotine replacement products.

“Although a large number of smokers report that they have quit smoking successfully with the help of e-cigarettes, health professionals have been reluctant to recommend their use because of the lack of clear evidence from randomised controlled trials. This is now likely to change.”

The only previous trial comparing e-cigarettes to nicotine patches used early ‘cig-a-like’ e-cigarettes with very low nicotine delivery, had no face-to-face contact, and found low efficacies for both treatments.

Funded by the National Institute for Health Research, supported by Cancer Research UK and published in the New England Journal of Medicine, the new study was set-up to test the long-term efficacy of newer refillable e-cigarettes compared with a range of nicotine replacement treatments.

886 smokers attended UK National Health Service stop smoking services (in Tower Hamlets, City of London, Leicester and East Sussex) and were randomised to receive either a nicotine replacement treatment of their choice (including patches, gum, lozenges, sprays, inhalators, or a combination of products) provided for up to three months, or an e-cigarette starter pack with one or two bottles of e-liquid and encouragement to buy future supplies of their own choice of strengths and flavours.

In addition to e-cigarettes being almost twice as effective, the researchers found that:

Study author Dunja Przulj from the Health and Lifestyle Research Unit at Queen Mary's Wolfson Institute of Preventive Medicine said: “The UK specialist stop smoking services will now be more likely to include e-cigarettes among their treatment options, and health professionals will feel more comfortable in recommending e-cigarettes as a stop-smoking intervention. This may ultimately further accelerate the reduction in smoking and in smoking related diseases.”

Professor Hywel Williams, Director of the NIHR Health Technology Assessment Programme, said: “This groundbreaking NIHR-funded study provides clear evidence that e-cigarettes are almost twice as effective as nicotine replacement therapy for helping smokers to quit. Cigarette smoking is still a major cause of ill health and death in the UK, so this study will provide much needed evidence to help people and policy makers to make informed choices.”

Martin Dockrell, Tobacco Control Lead, Public Health England, said: “This landmark research shows that switching to an e-cigarette can be one of the most effective ways to quit smoking, especially when combined with face-to-face support. All stop smoking services should welcome smokers who want to quit with the help of an e-cigarette.”

The study saw a stronger e-cigarette effect than in previous trials, and the researchers say this could be due to the inclusion of smokers who were seeking help, the provision of face-to-face support, and the use of refillable e-cigarettes for which smokers sourced their own choice of e-liquids.

The researchers add that the reason e-cigarettes were found to be more effective than other nicotine replacement therapies could be primarily because they allow better tailoring of nicotine dose to individual needs, but also because they provide some of the behavioural aspects of smoking cigarettes.

'Smokers shouldn’t be afraid to experiment to find what works'

Sophia Lowes, from Cancer Research UK, said: “This is the first study to show the effectiveness of e-cigarettes combined with behavioural support for giving up smoking, and the results are extremely positive. This research should give doctors, nurses, pharmacists and Stop Smoking Service advisers further confidence to recommend e-cigarettes as an effective means of quitting.

“Smokers have a range of options available to help them quit, including nicotine replacement therapy, prescription medication or e-cigarettes. Everyone is different, so smokers shouldn’t be afraid to experiment and find what works for them. But whatever the method, it’s clear that using the support available from local Stop Smoking Services gives smokers the best chance of quitting.”

The study has several limitations. Product allocation could not be blinded, which could affect results if nicotine replacement was seen as an inferior option and those participants were putting less effort into their quit attempt. The team tried to limit expectation effects by recruiting only participants with no strong product preference, and the results in the nicotine replacement arm were at least as good as in routine practice.

The findings may not be generalisable to smokers who are less dependent, or to first generation ‘cig-a-like’ e-cigarettes, and further trials are needed to determine whether the results generalise outside the UK services.