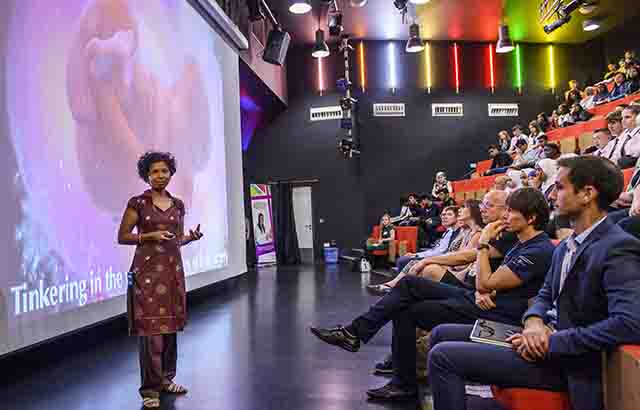 Dr Chowdhury’s research is investigating ways to repair holes in the fetal membranes after premature rupture and reduce preterm births.

During the talk, she explained how the fetal membranes could be repaired with a new bioengineering approach that mixes the best in science, technology, engineering, maths and medicine (STEAMM) subjects at Queen Mary University of London.

She spoke about the different technologies to repair defects in the fetal membranes and the opportunity to work with a global team of leading scientists, engineers, doctors and entrepreneurs to address the weakness in the tissue.

Dr Chowdhury explained the pathway she took to becoming the only female academic bioengineer from Bangladesh at Queen Mary’s Faculty of Science and Engineering.

She said: “We need to help young people expand their scientific knowledge and feel more confident about achieving a scientific career path. By placing STEAMM at the heart of the curriculum, young people will interact with the UK’s leading research and technology developments, and be inspired to become a future bioengineer. These events provide an exciting opportunity for young people to meet female role models and appreciate how STEAMM affects our daily lives.”

Dr Chowdhury spoke about how Professor Peter McOwan, who was Queen Mary’s Vice Principal for Public Engagement and Student Enterprise and an ambassador promoting diversity and inclusivity of STEAMM subjects to young people, influenced her own career progression.

She added: “Peter was a world leading scientist, scholar and entrepreneur who played a big part in my life. He fronted the campaign to promote subjects in maths and computer science and recognised the value of educating young people early on. Peter has worked on a plethora of major projects to publically promote and enhance the student experience. His core strategy was to ensure that every person from all walks of life can go anywhere and aim high. His words to me were ‘Think big, then think bigger‘.” 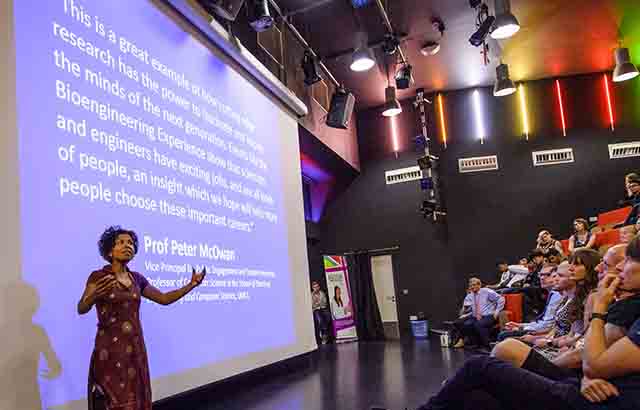 Neil Jones, Principal at Jupiter Community Free School, who introduced bioengineering to his pupils after working with Dr Chowdhury said: “Peter’s legacy will have a profound impact on science in schools. Through the experiences at Queen Mary, children will recognise how co-creation, collaboration and sharing knowledge can impact science and technology developments that will help thousands of people in the UK. Peter gave us this opportunity to shape the world view of our pupils and for this we will be eternally grateful.”

A career for everyone

After the talk, Dr Chowdhury hosted a Q&A with Professor Brian Cox who had given a presentation about black holes in space. 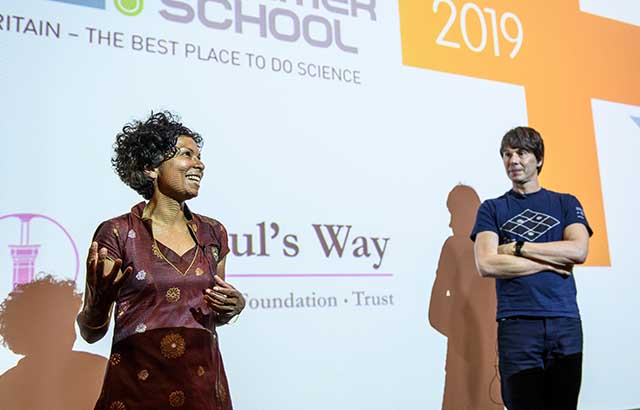 One of the students asked whether cultural diversity influenced the career path of a bioengineer. Dr Chowdhury described her own cultural, societal and ethnic differences and said there are many benefits to fostering culture and class diversity. She spoke about how the community science events have challenged the core of the engineering mindset and influenced the way the world works.

Douglas Brown, Headmaster at St Joseph’s in the Park, said: “Our pupils have been visiting Queen Mary for five years, and have been inspired to continue to study science at GCSE and A Level. They discovered that there are opportunities to change and improve lives.”

Dr Chowdhury then played footage of a film, created in partnership with the Ideas Foundation, to encourage the audience that bioengineering can be a career for everyone.

Heather MacRae, Director of the Ideas Foundation, said: “Educating engineers to tell their story to a new audience is a vital part of public engagement. This project would not have happened without the passion for education and outreach that Professor Peter McOwan modelled and inspired women like Dr Chowdhury.”