An exhibition focusing on the liberation of Auschwitz in 1945 has opened at Queen Mary University of London. Following the official opening there was a special screening of the film Unseen Holocaust which Jeremy Hicks, Professor of Russian Culture and Film at Queen Mary, was a consultant. 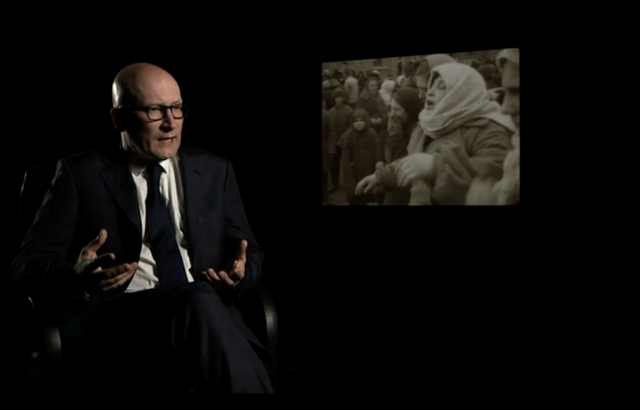 An exhibition on the Holocaust, featuring more than 80 documents and photos from archives around the world, has opened at Queen Mary University of London. The collection, The Holocaust: Annihilation, Liberation, Rescue will be on display in the foyer of the Arts Two Building of Queen Mary's Mile End campus from 25-28 April. After this it will move to the Russian Cultural House in central London. Anton Chesnokov, Director of the of the Russian Cultural House, was also part of the opening.

In particular, attention is given to the post-war lives of the liberators and survivors, based on their personal documents and stories. A letter by Anne Frank’s father, Otto, about being “saved by the Russians” is one of the various unique artefacts included in the collection.

The exhibition was initiated by Ilya Altman, co-chairman of the Russian Research and Educational Holocaust Centre and Professor of History at the Russian State University for the Humanities.

The collection has already been displayed at the UN, the Council of Europe, UNESCO, Berlin City Hall and the parliaments of Russia, Czech Republic, Argentina, Uruguay and Israel.

Following the opening of the exhibition, a special screening of the film Unseen Holocaust took place. Professor Jeremy Hicks from Queen Mary’s School of Languages, Linguistics and Film was a consultant on the film and took part in the panel discussion which followed.

Professor Hicks said: “This is a unique film which shows rare footage of the Holocaust, filmed by Soviet camera crews during the Second World War.

“At a time when intolerance in Europe appears to be on the rise, this film sheds important new light on one of the darkest chapters in recent history.”

The screening of Unseen Holocaust was part of Queen Mary’s new Public Lecture Series which brings together Inaugural, guest speaker and ‘hot topic’ lectures taking place from all schools and departments from across the University. The events, which cover a range topics and subject areas, are open to all staff and also the general public.