One of the big unsolved mysteries in physics is what happened to all the antimatter after the Big Bang - the answer may lie in neutrinos. 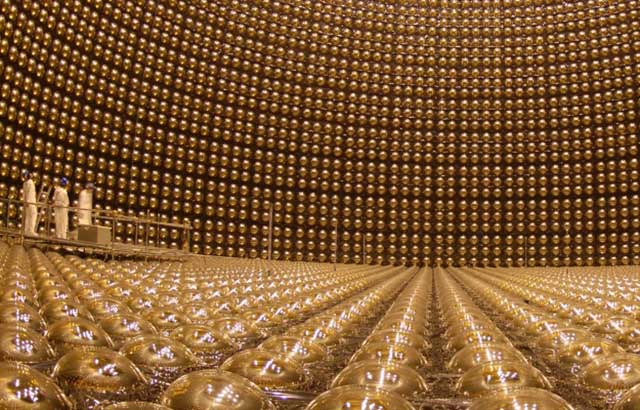 The inside of the Super-Kamiokande detector without water. Credit: Kamioka Observatory, ICRR (Institute for Cosmic Ray Research), The University of Tokyo

At the Royal Society Summer Science Exhibition 2018, which runs from 2-8 July, Queen Mary’s neutrino group led by Professor Francesca Di Lodovico will be presenting their research into why this invisible particle is so important.

The exhibit describes the eagerly anticipated next-generation Hyper-Kamiokande experiment, a huge water tank in Japan that will able to measure the extremely subtle properties of this difficult to detect particle.

At the exhibit, hosted with the University of Durham/IPPP-Durham and with contributions from the UK Hyper-Kamiokande and Super-Kamiokande collaborations, visitors will be able to put on a virtual reality headset and place themselves inside the tank that constitutes the detector in which neutrinos can be observed. With the headset on users will be able to throw neutrinos to make rings of light.

Elsewhere at the exhibit there will be a neutrino computer game for kids, a photosensor from the Super-Kamiokande on display as well as a small model of the detector that will show the rings of light. There will also be two apps running on tables, one showing the neutrinos that surround us and the other one showing how neutrinos can be produced with a particle accelerator.

Professor Di Lodovico said: “We’re really excited to have an opportunity to demonstrate our research into neutrinos at the summer science exhibition. Neutrinos could hold the key to the antimatter-matter conundrum so the more we know about them the more they will be able to tell us about the universe.”

Why is the neutrino important?

Antimatter is made of particles which have charges opposite of normal matter. At the origin of the universe, matter and antimatter should have been created in equal amounts. So why is almost everything now only made of matter?

A tantalising body of evidence is building to suggest that the invisible elementary particle, the neutrino, may play a key role in tipping the antimatter-matter balance. The exhibit sheds light on the race to understand these ghostly particles, trillions of which pass unnoticed through our bodies every second.

The researchers aim to understand the differences between neutrinos and antineutrinos, by creating beams of the particles and using giant detectors, such as the Hyper-Kamiokande, to study how they change after travelling kilometres from their source.

And naked mole-rats too

Meanwhile, on 6 July running from 2:30pm to 6:30pm, Queen Mary’s Dr Chris Faulkes and Julie Freeman will be hosting a drop-in session at the exhibition for a naked mole-rat life drawing workshop.

In the session, visitors will learn about the wonderful world of the naked mole-rat and why these captivating creatures make fascinating subjects to study. Grab your sketching pens and pencils and discover their secret life under the soil.

The exhibition, which is free to attend, is made up of 22 exhibits showcasing some of the best research being done right now across the UK, with the scientists there all week to chat to visitors about their discoveries.