A glass sculpture has been unveiled at Queen Mary’s School of Physics and Astronomy – inspired by the research that takes place there. 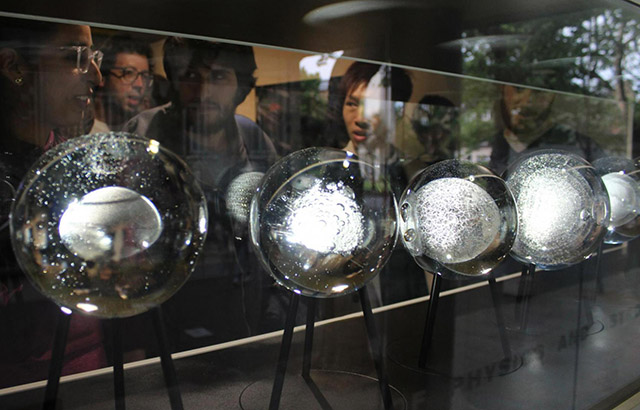 Last week President and Principal Professor Colin Bailey unveiled the new work of art in the foyer of the G O Jones building at the Mile End campus.

The work, by east London artist Livvy Fink, was commissioned to represent the diversity of Queen Mary’s research in physics and astronomy and draws inspiration from a range of physical concepts, including phase transitions, string theory and the high energy collisions of elementary particles.

It consists of seven glass spheres and within each is embedded a complex and intriguing internal structure magnified through the natural lens of its rounded shape.

It will remain on permanent display in the foyer of the building and is lit by a fibre-optic arrangement that was designed by Professor David Dunstan and Livvy, and built by Absolute Action Ltd.

Professor David Berman, Deputy Head of the School of Physics and Astronomy, said: “This is the latest in a line of collaborative projects involving internationally acclaimed artists and researchers in the School of Physics and Astronomy. We believe that public awareness of the research we do here is encouraged and enhanced by sharing our insights with creative artists and supporting them in producing high-quality art inspired by our work.”

Livvy Fink studied glass at The Royal College of Art and The School of Applied Arts in Zelezny Brod, Czech Republic. In 2016 she spent time in the School of Physics and Astronomy, having conversations with members of each of the four research groups in the School: Astronomy; Particle Physics; Materials Physics and String Theory; from which the narrative of the piece evolved.

She said: “I was intrigued by the similarities and connections that run through the disparate-seeming scales of the macro and the micro in both physics and astronomy: the sense of wonder both provoke; the use of light and lens in aspects of their discovery; the mirroring and movement of form and composition. For me glass as a material is uniquely poised to capture processes and ideas, the internal structures which animate the pieces are themselves the results of subtly shifting behavior within the glass during its transition between temperatures. As it moves between liquid and solid states, traces are left showing the history of the material now seen as frozen moments captured in the solidity of the cold glass form.”

The G O Jones building is named after Gwyn Jones, who was Professor of Physics and head of the physics department during the 1950s. His specialist area of research was glass and in 1956 he published a book, simply entitled Glass. Though directed primarily to students of the properties of materials, it is also regarded as a valuable source for artists working with glass.

Queen Mary is a major contributor to London’s diverse artistic and cultural landscape, and has built strong relationships with its local, national and international audiences through the arts. A new Arts and Culture strategy was launched in November 2017 with the aim of developing the university as a world-leading centre of excellence in arts and culture within higher education.