A historian from Queen Mary University of London recently met with German President Frank-Walter Steinmeier to discuss her book on the ‘1968 movement’ in Germany. 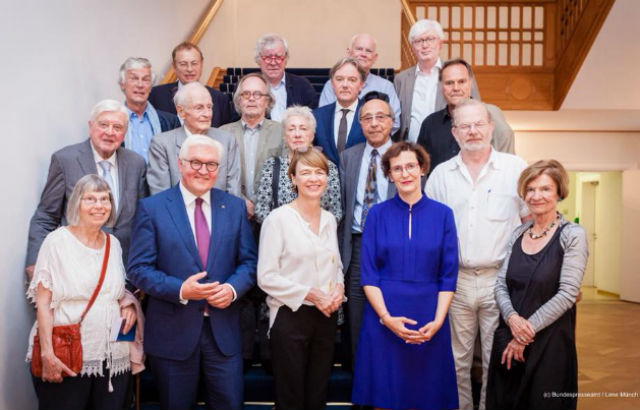 'The Other Sixty-Eight: Social History of a Revolt’ has received widespread media attention in Germany, Austria and Switzerland; highlights include interviews in DIE WELT and Echo der Zeit. It calls for the revolutions of '68 to be redefined as an anti-patriarchal movement, as well as one of generational clash.

Professor Christina von Hodenberg from Queen Mary’s School of History argues that although female activists created the majority of the lasting cultural changes that resulted from '68, public understanding of the movement has always been too focused on generational divides between fathers and sons.

How ‘68 relates to German democracy today

Professor von Hodenberg’s dinner with the President, which took place in Schloss Bellevue in Berlin, was also attended by former '68er' activists. This included some of the women that her book argues have been overlooked by history, such as Helke Sander and Gretchen Dutschke-Klotz. Professor von Hodenberg noted how the female 68ers “spoke up and challenged some of the more traditional accounts by the male 68ers present.”

The group explored how the sixties protests relate to today’s concept of German democracy, and to the populist challenges it faces. Alongside three other historians, Professor von Hodenberg discussed the extent to which the sixties protests can qualify as positive force for democracy, and overcoming the Nazi past, or whether they should be rejected because they gave way to political violence and terrorism.

Commenting on the 68er women, Professor von Hodenberg said: “68er women made the private political, started kindergarden, changed female biographies beyond the elites, and challenged patriarchy on the new left and beyond.” She added: “Despite this, the ‘female 68ers’ are at best seen as ‘revolutionary brides’ who brewed coffee, sewed flags and typed leaflets for male comrades.”

The historian attributes this ‘collective amnesia’ to the male narrative produced by the media and historians. She highlights the media’s uncritical circulation of gender-biased photos and films from the 1960s, and notes that male icons of the rebellion dominate book covers of the West German sixties, for example, Rudi Dutschke, Daniel Cohn-Bendit and Fritz Teufel.

“Socialised to stay in the shadows”

In contrast, Professor von Hodenberg argues that female activists such as Helke Sander, Sigrid Damm-Ruger and Silvia Bovenschen have been “all but forgotten”. She criticises the mass media’s sexualisation of women, observing that the “pin-up of the revolt”, the model and K1-member Uschi Obermaier, was “very far from the feminism of her contemporaries.”

The book also suggests that many of the early women activists evaded commemoration because they had been “socialised to stay in the shadows” and felt uncomfortable on the public stage. Professor von Hodenberg draws attention to the private sphere, where much of women’s protest occurred, arguing that this made their contribution less visible than the men’s activities in traditional politics.

Isolated from the overall narrative

The book reveals that although the ‘female ‘68’ included the first stirrings of the second wave of the feminist movement, master surveys by German historians do not include feminism as part of the overarching narrative.

Professor von Hodenberg argues that this is mainly because generational clashes dominate the story of '68, such as the “completely overblown myth” of the conflict between Nazi fathers and antifascist sons, which developed around that time.

Commenting on the absence of feminism from the overall narrative of '68, Professor von Hodenberg said: “Typically, the authors wholeheartedly acknowledge that a sea change took place, and thereafter avoid in-depth discussion of it. They applaud the positive impact of the feminist movement, while isolating it from the general narrative.”

During a recent talk, Professor von Hodenberg explained that if gender were taken into account, ‘68 would take on a different meaning for the history of West Germany: “Once we write women back into the story, the character of ‘1968’, its role as a caesura of post-war German history, and the concept of the ‘68er generation’ all need to be re-evaluated.”