Symposium marks the 100th anniversary since women were granted the right to vote in UK parliamentary elections. 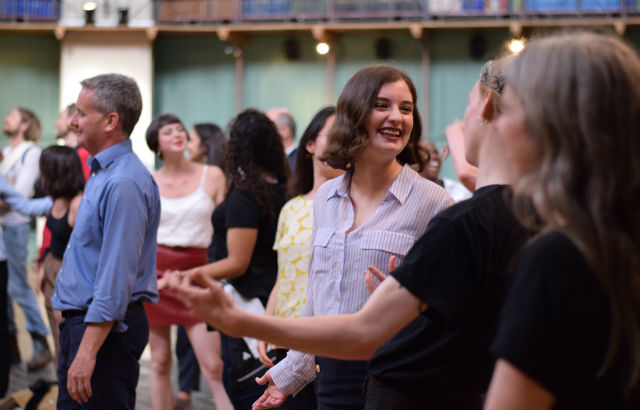 Queen Mary University of London has hosted a symposium to mark the 100th anniversary of the passing of the Representation of the People Act, which first granted women the right to vote in UK parliamentary elections.

Women’s Voices in Parliament, held on 13 June 2018, brought together academics from across the fields of Drama, Politics, and Gender and Media Studies, alongside artists, performers and students, inviting them to tackle urgent and challenging questions of representation.

During the course of the event, eight speakers shared powerful testimonies on a range of themes including representation, inclusion and diversity. This was reflected in the range of activities which formed the evening. Two verbatim performances took place alongside a discussion about what progress has been made towards equality in the last century and what still needs to be done.

Dr Naomi Paxton, Associate Fellow at the School of Advanced Study, representation both in terms of gender equality but also in terms of ethnicity, commenting: “Where are the non-white feminists and why are their voices not being heard?”

Rainbow Murray, Professor of Politics in Queen Mary’s School of Politics and International Relations, discussed representation in parliament and said that the practicalities of childcare make it difficult for women to enter into politics. Whilst progress had been made with the establishment of a crèche at Westminster, she argued that the situation is more complex.

“There can be a stigma when it comes to childcare, which prevents many women from entering politics in the first place. It is often said that he who dares, wins. When it comes to women, she who cares, doesn’t get near to the table,” said Professor Murray.

Dr Ella Finer, Lecturer in Queen Mary’s School of English and Drama, and one of the organisers of the event, said: “The individual and collective generosity of everyone participating: speakers, performers and audience is such a powerful reminder that careful reciprocal listening is a political act.

“Listening to and for difference in the pluralised group that is ‘women’ needs to happen while celebrations of political representation take place over this year. Professor Sarah Childs brilliantly, directly warned of Vote 100 becoming a celebration of the celebration, asking us to think about what exactly we are honouring with banners and sashes in green, white and purple.

“It is an especially important question because, as artist Nephertiti Oboshie Schandorf's contribution crucially reminded, "Votes for Women" in 1918 did not mean votes for all.

“This was a fascinating evening in which urgent questions of representation in Westminster Palace were augmented and amplified in the former library of the People's Palace, including most poignantly by the highly politicised students of Queen Mary.”