What does Brexit mean for Black and Asian Britain?

Where does race and ethnicity play out in the Brexit debate? These issues were explored during the latest event held by the Mile End Institute at Queen Mary University of London. 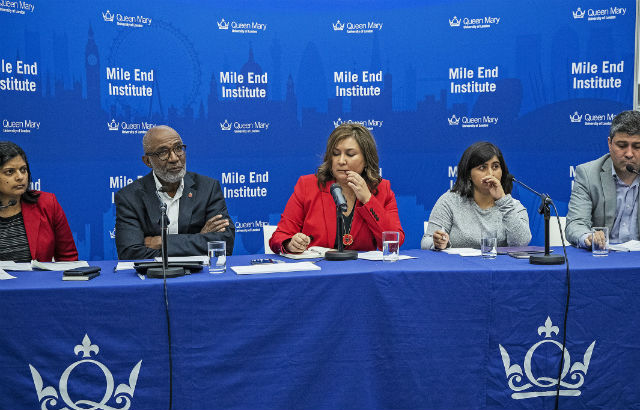 Britain’s four million Black and Asian voters emerged as a crucial electoral battleground during the 2016 Brexit referendum. The Brexit debates raised questions about immigration, race, identity and the Commonwealth, sparking vigorous debates in newspapers such as The Voice and Eastern Eye.

Voting exposed significant differences within and between minority groups, while the aftermath of the vote sparked further controversies over immigration rules, hate crime and the legacies of empire.

Neema Begum, a political scientist at the University of Manchester researching ethnic minority voting, political participation and representation, opened the debate. “In my view there were three main areas of the Brexit debate which were concerns about racism, immigration and Britishness, each of which could be deployed by either side.

“Concerns about racism, for example, could drive a Remain vote because of fear of the rhetoric of Nigel Farage and UKIP, but it could also encourage Leave voting due to anger at the EU’s treatment of refugees and fears of Islamophobia in Europe,” she added.

Trevor Phillips, former chair of the Equality and Human Rights Commission argued that the Remain campaign was too focused on economic arguments when cultural concerns were also powerful. The apparent reluctance of the Remain campaign to discuss immigration was a mistake in his view. “It looked like we had nothing to say about the thing that was important to most people,” he said.

Sunder Katwala, Director of independent thinktank British Future reflected on the potential for a no deal Brexit which he described as “dangerous” and would lead to a “blame game” against the EU and potentially other groups including ethnic minorities.

Katwala also argued that like others, there was apathy amongst voters from ethnic minorities which Remain failed to acknowledge. “The Remain campaign was a textbook example of “cosmopolitanism without diversity,” he said.

Rupa Huq, Labour MP for Ealing Central and Acton acknowledged that the EU’s structures were not perfect but in her view, the UK should stay and reform from within. She described Jeremy Corbyn’s “seven out of ten” rating of the EU as “entirely sensible”.

Huq also highlighted the Leave campaign’s #SaveOurCurry initiative which in her view, picked up on a “real problem” of restrictive visas for curry chefs which created anger and frustration amongst many ethnic minority voters.

“This was not the fault of the EU, this was a result of Tory policy which included changes to the visa system in pursuit of an illusory immigration target,” she said.

When asked if she backed a second referendum, she confirmed her view: “The decision should be taken away from 650 MPs and given to the population.”

Despite Huq’s strong support for a so-called Peoples’ Vote, she believes that EU citizens should not be allowed to vote. “A new referendum must be the same franchise as the 2016 one,” she added.